Relatively little-known before winning a wildcard into the US Open main draw, Ellen Perez spoke to tennis.com.au about her breakthrough victory and emergence in the sport. 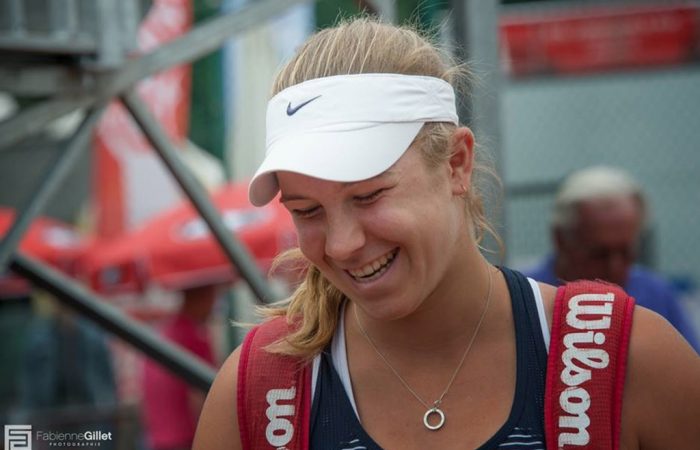 Ellen Perez arrived in Bradenton, Florida for the Australian women’s US Open wildcard play-off as arguably the least well-known competitor in the field.

A few days later, she’d defeated everyone in her path to secure a main draw berth at the year’s final Grand Slam event.

“Honestly, I’m really lost for words. I’ve never really had this great a result before so for me it’s overwhelming and I’m just really excited to be able to take this opportunity and play in my first Grand Slam,” the world No.723 said.

After beating Naiktha Bains in her first match, Perez took out top seed Arina Rodionova in the semifinals and clinched the wildcard with victory over second seed Ash Barty. She didn’t drop a set in three matches.

Having never before even contested a Grand Slam singles qualifying draw, she will line up among the world’s best players in the 128-player field at Flushing Meadows.

So, who exactly is Ellen Perez? And where did this result spring from?

The 20-year-old, from Wollongong in New South Wales, peaked at 585th in the world almost two years ago before making the decision to play tennis in the US college system.

She’s soon to begin her third (aka Sophomore) season at the University of Georgia, and has already come through three surgeries during her fledgling career – two on her wrist, and one to remove her appendix after a bout of appendicitis in May.

Prior to the wildcard play-off in Bradenton, Perez embarked on a swing of ITF claycourt tournaments throughout Europe, delivering her a maiden professional title at a $10,000 tournament in Brussels as well as a semifinal and final showing at two subsequent events.

Including the wildcard play-off, she’s won 22 of her past 24 matches.

“I was coming in with a lot of confidence, especially from the summer, so I guess I just really believed in my game and knew that I had put the work in beforehand. I guess my forehand and my serve were just working really well and I was able to kind of utilise that and use it to my strength,” she reflected.

“I was really surprised (to beat Rodionova and Barty). They’re well established players and I knew coming into this draw everyone could play some really good tennis. They’re really experienced players so I knew I had to play some of my best tennis to be able to compete with them.

“I just took every opportunity I had and ran with it. And I guess it worked out.”

Perez credited her work with Tennis Australia coach Louise Pleming during the European tour as being invaluable for her game, as well as her years at college, which she believes has taught her how to compete.

Her decision to attend university in the US goes beyond “just a degree and tennis”. With the University of Georgia being a Division I school in NCAA sports competition, Perez is enrolled on a full scholarship, majoring in sports management. Textbooks, accommodation, tennis clothing and health insurance – which came in handy when she required surgery – is all provided free of charge, as is access to the university’s physios, trainers and nutritionists.

Now, Perez says she’s largely free of wrist issues – the only complaint is that it simply takes a few extra minutes to warm up.

“I was looking at college when I was 580 in the world and I was kind of at the point where I could choose to go pro or go to college. I had a wrist injury at the time, so I thought it was the best opportunity to go for at least a year and tap into all the resources that they could provide and get some good tennis and eventually look to go pro from there,” she explained.

“At the moment I’m open to a lot of options. The aim obviously is looking at college and completing my two years left. But that could change at any moment.”

For now, her focus is on the upcoming US Open.

Grand Slam tennis is not a completely new prospect – she teamed with compatriot Belinda Woolcock to contest the women’s doubles event at Australian Open 2016. It may have resulted in a first-round loss, but it nonethless gave her a taste of the sport at the highest level.

She said she would hit with her college teammates on campus before heading to New York, where she would join fellow Aussie women Sam Stosur and Daria Gavrilova, players she enjoyed the chance to hang out with in Tampa following her play-off win.

They were among the many players to reach out to Perez after her breakthrough victory. Another was decorated American John Isner, a University of Georgia alumni who had followed the wildcard final and sent a message of congratulations.

“Australian Open doubles kind of opened up my eyes to being around the top players in the world. It’s a great opportunity to be around that again and I really thrive in that environment,” Perez said.

“So I’m looking forward to the opportunity to be able to compete against the best players in the world and kind of establish where I stand in that group.

“For me, it’s just excitement.”