John Millman has produced the best Wimbledon performance of his flourishing career in defeating 26th seed Benoit Paire to reach the last 32. 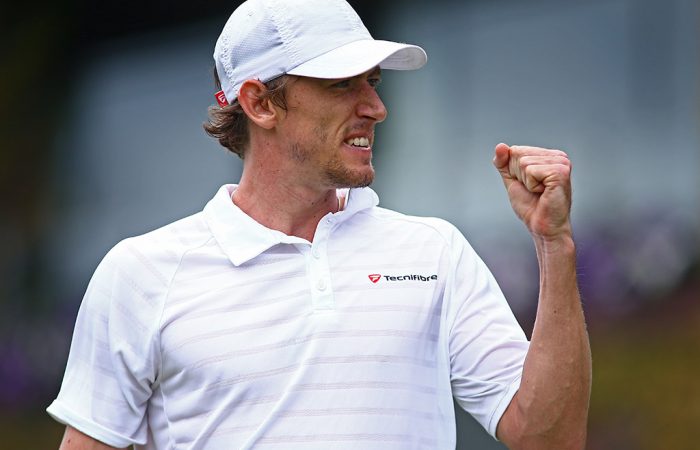 John Millman has celebrated his Olympic call-up by charging into a glittering Wimbledon third-round clash with second seed Andy Murray.

Millman learned of his Rio selection shortly before taking the court for his impressive 7-6(5) 6-3 4-6 6-2 second-round upset of 26th seed Benoit Paire on Thursday.

“It means the world to me to be able to represent my country at the Games,” Millman said.

“I’m buzzing for that, and then to be able to go out there and put together a pretty good performance out there was awesome.

“I live to fight another day here at Wimbledon.”

At 67th, Millman is the highest-ranked available player at Australia’s disposal – following the twin withdrawals of top-20 talents Nick Kyrgios and Bernard Tomic – but as he’d not representated Australia in Davis Cup his case had to be heard by the ITF.

“And I’m very grateful that the appeal went through,” Millman said.

“For me, it’s the greatest honour to play at the Olympic Games and represent your country.”

Millman was at his energetic and enthusiastic best against the stylish but error-prone and volatile Frenchman in the two-and-a-half hour win to set up a showcourt showdown with Murray – and admitted he’d never set foot on either of the two main show courts, where the match is likely to be scheduled.

Paire produced some of the finest shots of the tournament and frequently had Millman hurtling around the court as he dictated play – but the moments of brilliance were tempered by 63 errors to the Australian’s 18.

Paire also engaged in a war of words with chair umpire Carlos Ramos throughout the match, with his angry tirades covering topics such as his racquet not being restrung quickly enough, the Australian fans being too vocal and the number of towels he was allowed.

Millman took the first set in a tense tiebreak, and broke Paire twice to take second set in 43 minutes.

Paire controlled the third set with an early break.

But, egged on by Davis Cup coach Lleyton Hewitt, Millman bulldozed his higher-ranked rival in the fourth set – snatching two breaks as the Frenchman unravelled to bring a speedy halt to the match.

Millman will be joined in Rio by injured star Thanasi Kokkinakis, along with women’s duo Sam Stosur and Daria Gavrilova, and doubles pair John Peers and Chris Guccione.