Millman storms back to win in five

John Millman has produced a fighting performance on Tuesday at Wimbledon, recovering to beat Albert Montanes in five sets to reach the second round. 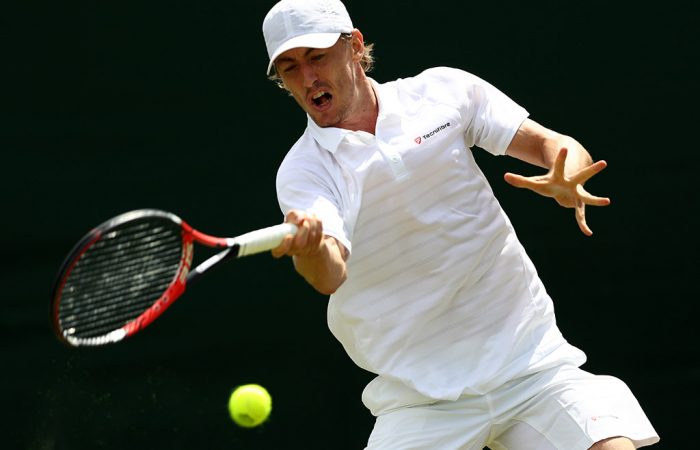 His Olympic hopes hanging in the wind won’t deter John Millman from fighting for a coveted spot in Wimbledon’s third round on Thursday.

Millman will square off with seeded Frenchman Benoit Paire after battling from two sets to one down to score a 7-5 4-6 5-7 6-4 6-3 victory over Albert Montanes in his opener on Tuesday.

The 27-year-old admitted to “winning ugly” after taking the Spanish claycourter a little for granted on London’s hallowed grass courts.

“Ball-striking wise, I can play a lot better but I’m in the second round, so I can’t be too disappointed really,” Millman said.

“Sometimes I’d prefer to not play my best and get through it than flush the ball and be out.”

Millman came tantalisingly close to reaching the final 32 at the All England Club last year, fading from two sets up against Marcos Baghdatis, and is “100 per cent” convinced he can topple the higher-ranked Paire.

“The more I play at this level, the more I get used to it and the more I know what it’s all about,” he said.

“I made third round at the Aussie (Open) earlier this year and I’d love to do that here at Wimbledon.

“I came close last year and that inspires you and motivates you to do better.”

Millman will play under the backdrop of Tennis Australia’s appeal to have the Australian No.3 eligible for the Rio Games in the absence of Nick Kyrgios and Bernard Tomic despite not having represented Australia in at least two Davis Cup ties over the past three years.

Millman expects a decision from the ITF on Thursday before an official announcement is made on Saturday.

“I’ve been speaking to not only Tennis Australia but a few other guys are in a similar boat to me, a few other peers from other countries, and everyone’s relatively confident that it’s going to go through,” Millman said.

“So in the back of my mind – I don’t want to get my hopes up – but I feel I will probably will be playing Rio.”

The world No.67 said the appeal process wouldn’t distract him on Thursday.

“This is Wimbledon. Wimbledon’s as good as it gets,” he said.

“I think the only thing that could be better is playing Olympics.

“If I get the opportunity to represent my country at the Olympics, that’s the icing on the cake.”

It continued a joyless run at Grand Slams for the two-time junior slam champion, with his only victory coming at Wimbledon in 2014 – before he exited in the second round.

Tuesday’s clash with the world No.145 and fellow qualifier Novikov – having avoided the biggest names in the draw – presented a “big opportunity” he admitted, and Saville couldn’t hide his disappointment at faltering when in control and up a set and a break.

“I had a good chance out there. He could go back and play (the second-tier) Challenger next week and I could face him there, so to face him in a Grand Slam is a big opportunity,” Saville said.

“It was a good opportunity that I lost today, but I can go out there and work on my game and hopefully it doesn’t happen again.”

Saville’s trusty serve – which proved a big weapon through qualifying – failed him as Novikov took control from midway through the second set.

The South Australian totalled eight double faults and just four aces, and while his 122 total points won was just 14 fewer than his American rival it was in the crucial moments where Saville came up short.

“My serve just dropped off a little bit, well a fair bit, and that just allowed him to play a bit more aggressive and find his feet a bit more, because I was on top.”

Saville pointed to the positives of his recent form, and the three impressive wins in qualifying which earned him a spot in the main draw this week, as reason to be content with this year’s Wimbledon experience.