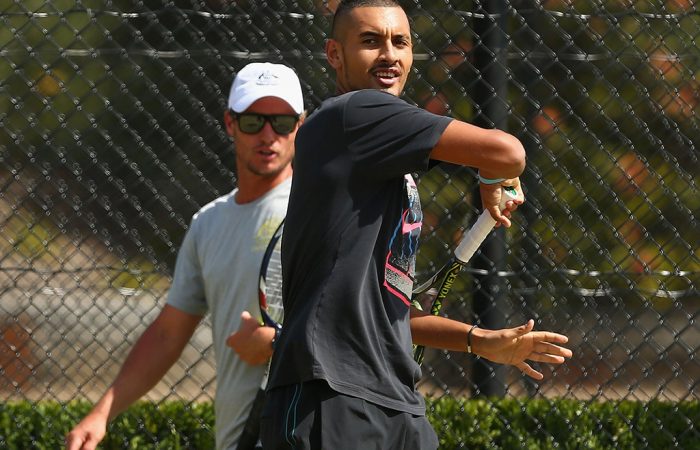 Lleyton Hewitt is backing Nick Kyrgios and Bernard Tomic to rise to the occasion when Australia’s two biggest hopes launch their Wimbledon title quests on Tuesday.

The two former quarterfinalists face early tests as they strive to join Sam Stosur in the second round of the grasscourt major.

But Hewitt believes Australia’s seeded stars not only have the class to overcome their first-round hurdles, but also the big-match temperament and grasscourt know-how to challenge for Grand Slam glory at the All England Club.

“Guys like Nick and Bernie, they love playing on the big courts in front of the big stadiums. That’s what you need if you’re ever going to hold up the trophy.”

World No.1 Novak Djokovic has also endorsed Kyrgios as a genuine contender.

“Kyrgios is definitely one of the players that can go far,” he said.

Not that Djokovic was doing Kyrgios any favours by warming up with Stepanek before his first-round win over James Ward on Monday.

Kyrgios is suitably wary of Stepanek – who will undoubtedly try to irritate the 15th seed with his niggly antics – but enters the championships relaxed and confident of making another charge.

“I feel my preparation has been as good as any time,” Kyrgios said.

“This is definitely one of my favourite times of year, coming here.

“I love how all the players sort of stay in houses around Wimbledon village. I love the set-up. I can bring my family over, have that home sort of feeling.

“Around the courts, I feel so comfortable here. I’ve made a couple deep runs in this event.

Tomic boasts a 4-1 winning record over Verdasco and edged the one-time Australian Open semifinalist in three sets en route to the semifinals at Queen’s after making the quarters on grass in Stuttgart.

“I feel like I’m playing some of my best tennis on grass and now we’re here at the famous Wimbledon tournament and I’m ready to go,” said Tomic, seeded 19th.

Stosur outclassed Poland’s world No.92 Magda Linette 7-5 6-3 in her opener on Monday to book a date on Wednesday with 2013 runner-up Sabine Lisicki, but Sam Groth fell to a 6-4 6-3 7-5 first-round loss to Japanese fifth seed Kei Nishikori.