Murray looms for Kyrgios at Wimbledon

No.15 seed Nick Kyrgios has been handed a tough draw at Wimbledon, including a projected fourth-round battle against world No.2 Andy Murray. 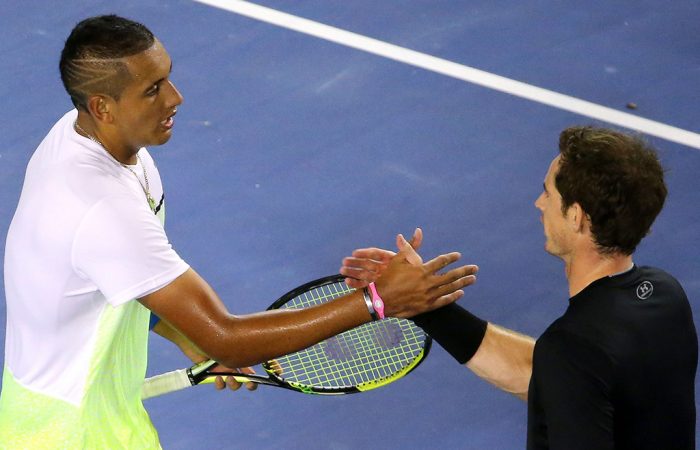 Australia’s Wimbledon hopefuls have copped horror draws at the All England Club and none more so than Nick Kyrgios.

Promoted from 18th in the rankings to an all-important top-16 seeding, Kyrgios was guaranteed not to strike a top-eight rival until at least the fourth round.

But he would have been hoping for someone other than Murray, the 2013 champion, who boasts a four-from-four record at tour level over Australia’s 15th seed and 2014 quarterfinalist.

Kyrgios, though, will unlikely be looking beyond the first week.

He opens against wily Czech veteran Radek Stepanek who, despite his lowly ranking of No.121 in the world, remains one of the most-dangerous floaters in the draw.

The 37-year-old had Murray on the brink at two sets to love down at this month’s French Open and will relish the chance to get under Kyrgios’s skin.

In the second round, Kyrgios could face classy grasscourter Dustin Brown – famous for taking out Rafael Nadal and Lleyton Hewitt on previous trips to London’s SW19 – then a third-round showdown with 22nd seed Lopez and his booming left-handed serve.

Lopez is a three-time Wimbledon quarterfinalist.

Wimbledon rookie Jordan Thompson has also been presented with a challenging draw, up against 14th seed Roberto Bautista Agut in the opening round.

Sam Stosur, Australia’s highest seed at No.14 in the women’s event, has also landed in a devilish section as she strives to reach the last 16 for the first time in 14 trips to the All England Club.

Stosur will start favourite to see off Pole Magda Linette in her opener but former finalist Sabine Lisicki, Czech nemesis Lucie Safarova and newly crowned French Open champion and No.2 seed Garbine Muguruza lurking in her eighth of the draw.

Daria Gavrilova opens her tournament against China’s Wang Qiang, with the winner set to take on 19th seed Dominika Cibulkova in the second round.

AUSSIES IN THE DRAW