Down a break in the third set of her match against Misaki Doi, Sam Stosur reeled off six of the next seven games to book a slot in the second round at Roland Garros. 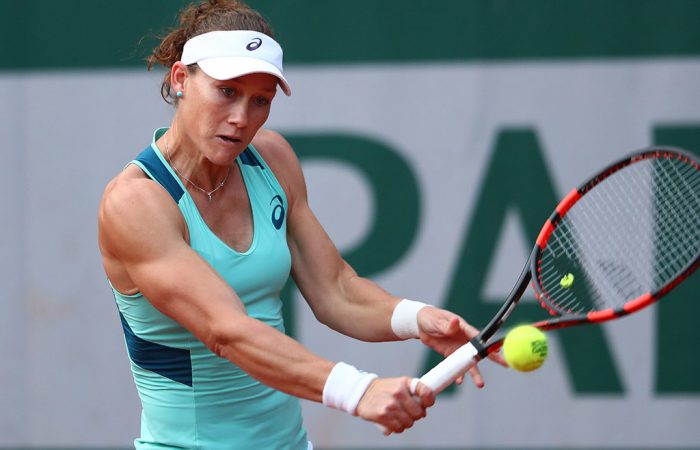 Sam Stosur has battled through injury to reach the French Open second round following a gutsy third-set fightback.

Stosur, who held a one-set lead in her match before bad light stopped play on Monday, fought back from a break down in the third set to win five-straight games en route to a stirring 6-2 4-6 6-3 victory.

The former runner-up and two-time semifinalist, who carried a left wrist injury into the claycourt Grand Slam, will face China’s Shuai Zhang, her doubles partner, on Wednesday.

Stosur said the wrist felt fine after match, and let out a sigh of relief at having recovered during the third set.

“I was pretty concerned,” she said. “I wasn’t feeling as good as what I was yesterday that’s for sure.

“She was playing very aggressive and any opportunities she had to step into the court she was doing that and all of a sudden I felt on the back foot.

“I had to work out a way to turn that around.”

Later on Tuesday, Daria Gavrilova found herself trading breaks with Duque-Marino throughout her 5-7 6-4 6-4 loss, and will rue letting opportunities slip in the second set.

The Russian-born starlet’s return of six break points would’ve been enough to win in straight sets on most other days, but the 21-year-old’s serve let her down and she was broken seven times.

Gavrilova won 57 per cent of points on her first serve – a figure which dropped to 39 per cent when Duque-Marino got a look at her second serve.

Meanwhile, Rodionova was an Australian casualty at the tournament when she lost 6-2 6-3 to Croatian teenager Ana Konjuh in 62 minutes.

Rodionova was broken twice in the first set as Konjuh raced to a 5-1 lead inside 20 minutes, with the Australian making seven unforced errors while hitting just four winners.

Rodionova made her young opponent work harder in the second set, fighting through a seven-minute opening game to hold serve, but conceded the crucial break in the seventh game to go down 4-3 as Konjuh motored to victory with another break.