At the Madrid Open on Friday, Nick Kyrgios came close to upending Kei Nishikori before falling in three sets, while Sam Stosur was hammered by Simona Halep. 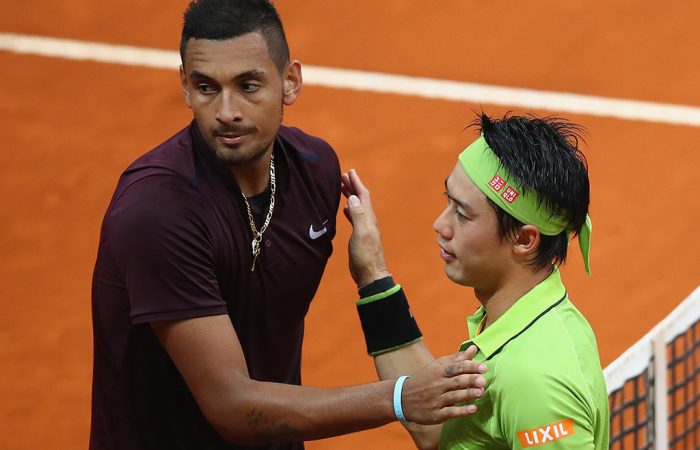 Nick Kyrgios’ Madrid Open campaign is over after he fell to a three-set 6-7(6) 7-6(1) 6-3 loss to world No.6 Kei Nishikori in a high-quality quarterfinal clash on Friday.

In a contest that lasted two hours and 38 minutes, the 20-year-old Australian showed great fighting qualities to win the opening set after saving two break points and then coming from 5-3 down in the tiebreak to take the set.

The loss clearly rattled the Japanese right-hander who uncharacteristically lost his cool early in the second set when he belted a ball into the crowd in frustration after failing to capitalise on two break points in the opening game.

However, Nishikori kept his composure to win the game and take he match to a second tiebreak which he went on to win comfortably.

Visibly growing in confidence, Nishikori raced into a 3-1 lead by finally breaking the Kyrgios serve in the fourth game and then saved three break points to wrap up a victory that will see him face Novak Djokovic in the semifinals.

Later on Friday, Sam Stosur was ruthlessly bundled out at the semifinal stage by Simona Halep.

The result was a disappointing end to another encouraging week for the Australian – who also reached the final in Prague last Saturday – as she gears up for the French Open beginning 22 May.

Halep, who reached the final of this event two years ago, was simply too good for Stosur who slipped to defeat in 51 minutes.