Madrid: Kyrgios and Stosur through, Tomic out

Nick Kyrgios slammed down 16 aces to set up a mouth-watering second round match, while Sam Stosur was given a free pass through to the third round in Madrid. 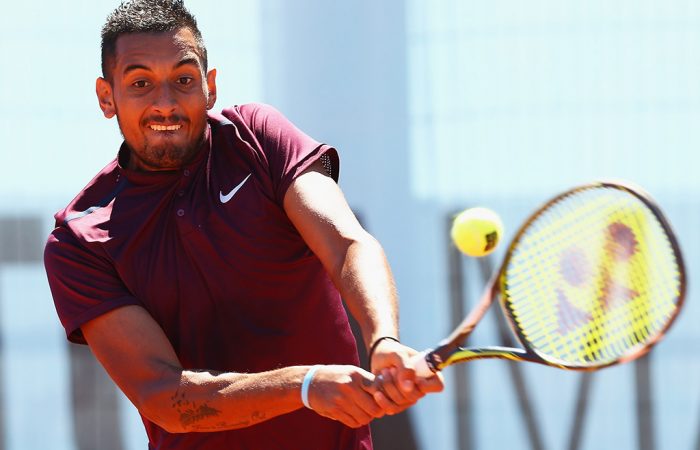 Nick Kyrgios is through to the second round of the Mutua Madrid Open following a hard-fought 7-6(7) 6-4 win over Argentina’s Guido Pella.

The world No.21 slammed down 16 aces against the 50th-ranked Pella and will now face Stan Wawrinka for a place in the third round on Wednesday.

The world No.4 and reigning French Open champion was given a bye into the second round.

The last two meetings between the pair have resulted in retirements; Kyrgios called time during the ATP event in Dubai in February with Wawrinka doing likewise in their clash in Canada last year.

It was another day to forget on clay for Bernard Tomic, who exited at the first hurdle for the third successive tournament after going down to Italy’s Fabio Fognini 6-2 6-4.

The world No.22 is yet to win a match since being forced to retire with a wrist injury in the third round at Indian Wells in March against big-serving Canadian Milos Raonic.

Stosur advances without hitting a ball

Meanwhile, Sam Stosur was gift-wrapped a place in the third round in Madrid after Lucie Safarova withdrew from their Tuesday clash due to a stomach bug.

Stosur will now play local favourite Carla Suarez Navarro for a spot in the quarterfinals on Wednesday after the Spanish world No.11 beat Germany’s Sabine Lisicki 6-3 6-2.

The pair have met six times and each boast three victories with Suarez Navarro winning three of the last four including a three-set success in Brisbane in January.

However, she’s expecting a testing encounter against the Queenslander, who will be boosted by an extra day of rest when they meet on Wednesday..

“She knows what it is to compete at the maximum level and how to compete here in Madrid,” Suarez Navarro said,

Australia’s Daria Gavrilova is also in action on Wednesday against former two-time Wimbledon champion and world No.6 Petra Kvitova.