Australian Fed Cup debutant Daria Gavrilova took time out from her third-round run in Charleston to chat about the prospect of representing her adopted country. 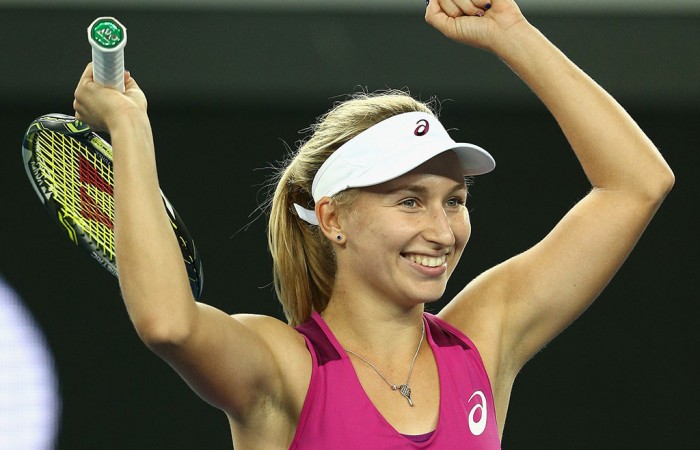 Daria Gavrilova has enjoyed a good build-up to Australia’s Fed Cup tie against the United States in Brisbane, reaching the third round of the WTA Volvo Car Open in Charleston.

She chatted to tennis.com.au during her week in South Carolina to discuss her inclusion in the squad for her first Fed Cup tie, her relationship with her compatriots, and her thoughts on competing in front of her new home crowd.

On making her Fed Cup debut for Australia:

“It’s very exciting. Also having Alicia here in Charleston right now and I kind of I am already feeling like I’m in the team. I’m a bit nervous as well, but I really enjoyed playing Hopman Cup (for Australia) and having the crowd behind me, and at the Australian Open. I really enjoy the Australian crowd and yeah, I just can’t wait to represent my country and it’s awesome that I get a chance to represent it in Brisbane, at home, as well.”

On competing in front of her home crowd:

“I think I’m going to get nervous, which is probably normal, but I’ll have my team supporting me and I think I should be fine. I really can’t wait and this week in Charleston I’ve been really getting ready for Fed Cup and like I said before, having Alicia here and almost the whole team around me, it really helps me and I feel more comfortable.”

On playing on clay:

“I’m in Charleston and had two good wins. I think it suits me because I’m a good mover and I enjoy sliding on the clay and yeah, I think I’ve got more time, and I can still be aggressive but I enjoy playing long points so it really suits me. Most of the time (growing up) I would play on clay. For about six months. The other six months we were actually indoors, so half and half.”

On her relationship with the other Australian players:

“We (Sam Stosur and I) have been playing the same tournaments and we always hit together before the tournament if we can and we all go out to dinner together – Casey, Sam and I and a few other girls. I think we really enjoy spending time together and being on tour together. We always watch each other’s matches, so I think Australian girls really support each other.”