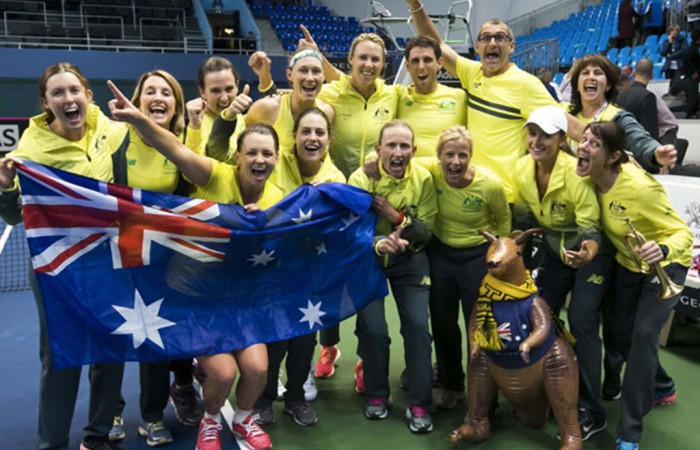 The veteran doubles pairing of Stosur and world No.3 doubles player Casey Dellacqua fought back from a set down in Bratislava on Sunday to defeat Jana Cepelova and Daniela Hantuchova 5-7 6-1 6-2 and claim the tie 3-2.

Stosur had earlier ensured Australia started the day with the momentum, overcoming a rocky start to secure a straight sets victory over world No.29 Anna Karolina Schmiedlova and giving the visitors a 2-1 lead.

This was short lived, as 17-year-old Kimberly Birrell was swept aside by former Australian Open finalist Dominika Cibulkova 6-3 6-1 in 75 minutes, leaving the tie poised at 2-2.

Australian captain Alicia Molik gave a special nod to Stosur following the win, rating the world No.27’s performance with an “A double plus”.

“The hard part for Sam is that, particularly today, (she knew) for us to stay alive she had to win,” Molik said.

“That just goes to show what Sam can produce under pressure. And she shouldered a lot of the load this weekend – it’s a lot of expectation, it’s the weight of the nation on her shoulders.

“How well she carried us, I couldn’t say more words to commend her efforts this weekend.”

“Both Arina and Kim exceeded my expectations,” Molik said.

“I think it was a good result. We’re really happy that it came down to the wire, because we had two quality not just indivduals but a oartnership that I knew I could rely on.

Stosur, who had kept Australia in the tie with victories in both of her singles matches, came up big in the fifth and deciding rubber – holding serve in the crucial third set.

With both countries trading breaks of serve, Stosur produced a big hold to give the visitors the edge – either side of breaking both Cepelova and Hantuchova’s serve to take a 5-2 lead.

Dellacqua, who had missed the WTA Finals in October and then the entire Australian summer due to the lingering effects of concussion sustained in Beijing, said it was particularly special to compete.

“It was great today to be back out there playing again and feeling healthy and doing what I love, and that was playing for Australia and playing some good tennis,” Dellacqua said. “It was great that I was able to support the team members all weekend but also to get out there today and partner Sam and get the win for Australia.”

Dellacqua calmly served out the match to book Australia a place in the World Group Play-offs in April, with their opponent to be decided next week.

Molik said the Play-off would serve as a chance to erase memories of two disappointing losses in Fed Cup in 2015.

“It’s also about redemption for us, because we feel like belong at the top and we should be there,” she said.

“I think we’re showing our true colours now with our best team; we are one of the best nations in the world.”

“I guess I’ve been part of it a long time now and been there when our now captain (Alicia Molik) and coach (Nicole Pratt) were playing and I was the young rookie in the team,” Stosur said.

“Of course I’m proud of all the matches I’ve been able to compete in and win and be a part of it. It’s an honour to play for your country, so the more times you can do it it’s fantastic.”