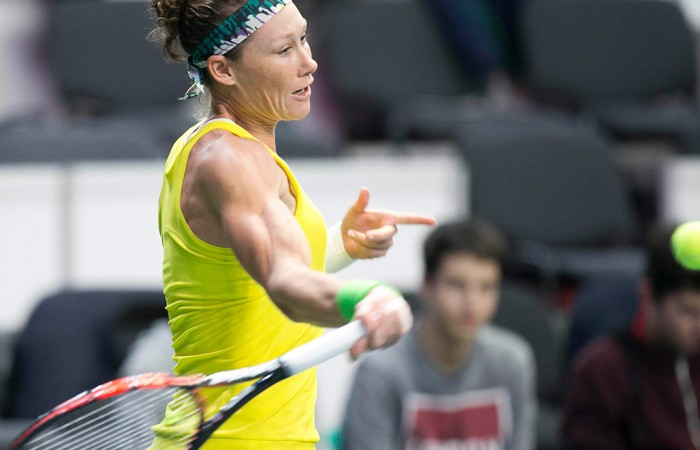 The hosts were leading the World Group II tie at Aegon Arena in Bratislava on Saturday after Arina Rodionova was downed 5-7 7-5 6-0 by Anna Karolina Schmiedlova in an epic battle that lasted more than three hours.

Rodionova, the world No.275, lead 7-5 4-1 against top 30 star Schmiedlova, but eventually succumbed to her surging opponent and a bout of cramps.

However, world No.27 Stosur took up the fight in the second match as she faced Cepelova, downing the 22-year-old 6-3 6-4.

With her serve reaching speeds of 200km/h, Stosur smacked four aces and 10 forehand winners to seal the win in a tidy 76 minutes.

Stosur has expressed a particularly strong desire to drive Australia to victory after injury forced her to sit out last year’s 4-1 defeat to the Netherlands, a result that relegated Australia to World Group II.

“It was good at get it 1-1 after that really long match at the start,” Stosur said.

“Arina played a great match but kinda ran out of gas in that third set unfortunately. I knew that I had to come out there and play well.

“Had a bit of a shaky start going down 2-0 and 3-1 but from that point on I played really well and really solid tennis and, yeah, felt in control of the match.

“I served really well today. Even the couple of times she had break points in that second set I was able to set the point up with my serve and hit a winner or hit a really good next ball so she didn’t really get a look in.”

In Sunday’s action (Monday AEDT), Stosur will face world No.29 Schmiedlova, while Rodionova takes on Cepelova.

Stosur then teams up with Casey Dellacqua in the doubles match against Cepelova and Daniela Hantuchova.

This weekend’s tie is the second meeting between the two countries; Australia won 3-2 in their 1995 encounter in the World Group II first round.