A trio of Australian men are now through to the second round of the Apia International Sydney. 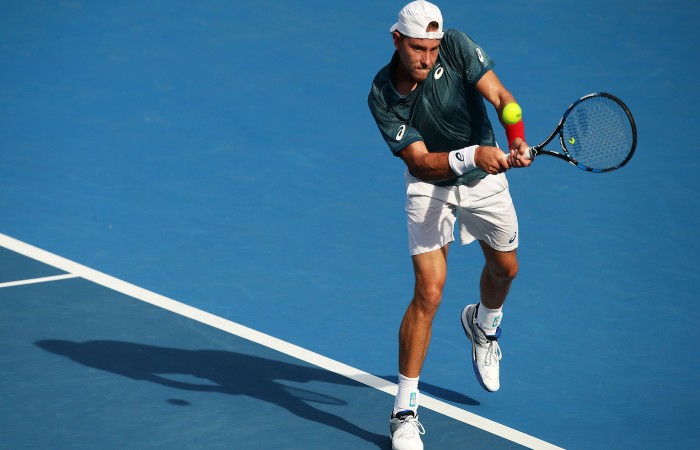 For the first time in a decade, there is a trio of Australian men through to the second round of the Apia International Sydney.

Duckworth completed a solid start to the week for the locals following top-ranked female Sam Stosur’s progression to her first Sydney quarterfinal in 11 years.

“It was really tough conditions,” Duckworth, ranked No.134, said after the win over the 72nd-ranked Cervantes.

“The wind was swirling around a lot in there. It would come from one direction and then go from the other.

“It was tough to find any sort of rhythm, but I think I handled myself pretty well, served pretty well, (and) used a bit of variety in my game, which helps in those sorts of conditions.”

Not since Hewitt, Chris Guccione and Peter Luzcak all advanced to the second round in 2006 has the Grand Slam warm-up event featured this many Aussie men.

An all-Aussie encounter between Tomic and wildcard Thompson on Wednesday night means at least one Australian is certain to make this year’s quarterfinals.

An improving Duckworth described men’s tennis in Australia as being “in a great place”, and credited Thompson, John Millman, Ben Mitchell, and Oliver Anderson for creating a competitive culture at their training base in Brisbane.

“One of us started doing well, and the other guys … we’re all practising together and we’re thinking, `If he can get to top 100, why can’t I?'” he said.

“Everyone sort of follows suit. (There’s) not a whole lot difference between all of us and we’re all sort of gradually improving.”

It is yet another sign of improvement from the Sydney product, who reached a career-high No.82 last year and appeared in all four Grand Slams.