Teenager Maddison Inglis has produced one of the best performances of her fledgling career to seal a berth in the main draw of Australian Open 2016. 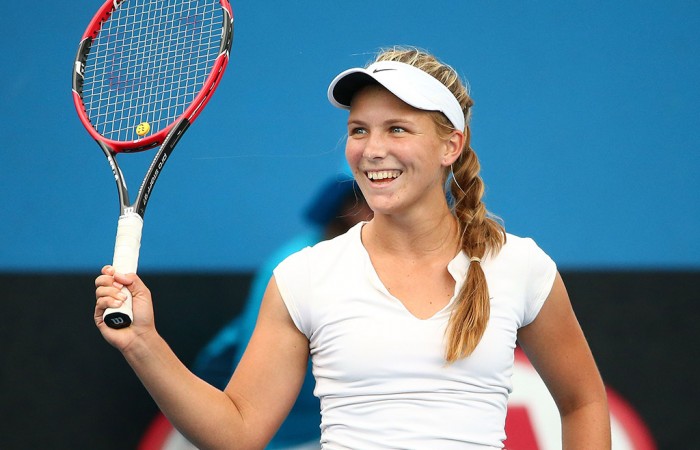 Maddison Inglis has produced a masterful performance to win the Australian Open 2016 Play-off at Melbourne Park on Sunday.

Inglis subdued Arina Rodionova 6-4 6-2 to secure an Australian Open main draw wildcard, just one week after narrowly missing out on one in the final of the 18/u Australian Championships.

“I was exhausted after the 18s, just mentally and physically. I don’t know – I got through it,” Inglis said.

“I’m so happy right now. I actually can’t believe it still. I was so nervous during that whole second set – I can’t believe I got through it, to be honest.”

Rodionova was backing up after a huge weekend which saw her win a torrid three set semifinal on Saturday morning before rushing off to her wedding.

She was understandably drained during Sunday’s final, her third straight loss in an Australian Open Play-off decider after falling to Daria Gavrilova last year and Casey Dellacqua in December 2013.

Yet even in peak condition it would have been a struggle to contend with Inglis, who showed remarkable composure and aggression despite being just 17 years of age.

The West Australian broke serve in the opening game of the match only for Rodionova to do exactly the same in the very next game.

But when Inglis scored her second break in the seventh game to push ahead 4-3, she wasn’t going to let her advantage slip again.

Going after her shots, controlling the centre of the court and looking to move forward at every opportunity, she bookended the final game of the first set with a powerful forehand and a swinging volley winner, closing it out to love.

In the second set, Inglis came out on top of a intense sixth game to push ahead 5-1.

When presented with a chance to serve out the match two games later, she made no mistake, sealing victory with a powerful first serve down the T.

“What went through my head was, if I push (the ball), she’s going to come back, and I don’t want to lose by just pushing it. So I just thought, it doesn’t matter how nervous I am, I’m just going to go for it,” she said.

“I think I hit the ball well, placed it well, and just controlled myself and my emotions well.”

Inglis will now line up in the 128-player Australian Open main draw in January and could conceivably face a star like Serena Williams or Maria Sharapova on a big show court.

“That would be awesome – they’re the best players in the world. I just don’t want to get thrashed (laughter),” she said.

“But that would be a cool experience. We’ll see.”