Roommates James Duckworth and Ben Mitchell will put friendship aside on Sunday when they face off for a place in the Australian Open 2016 main draw. 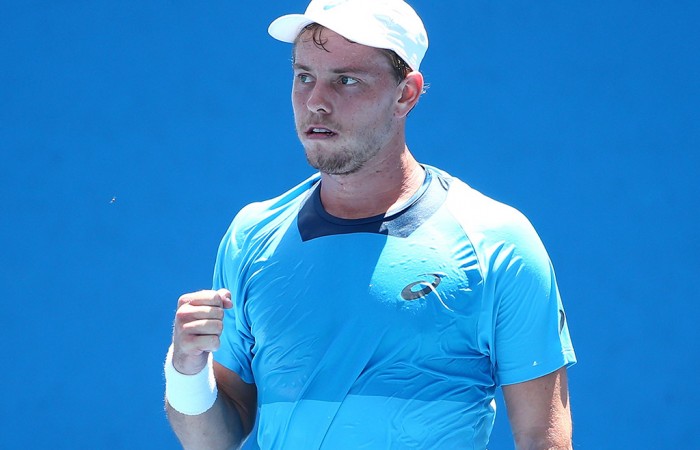 James Duckworth and Ben Mitchell have come through gruelling four-set matches on Friday to set up an intriguing final in the Australian Open 2016 Play-off.

“I’m happy to get the win. It was a little bit tight, a little bit nerve-wracking at the end there but happy I got through,” he said.

“I actually felt pretty good physically, surprisingly after it being such a hot day. If it went to a fifth set I wasn’t feeling badly physically, so I think I could have kept going.

“I’ve been sort of patchy each match. Probably got better as the match went on. That’s sort of what happened in all my matches.

“I’d like to try and start a little better; probably my intensity in that first set wasn’t as good as those last few sets, so that’s one of my goals for Sunday.”

Indeed, it was a topsy-turvy battle at Melbourne Park between he and Matosevic, who is on the road back to the top of the game after an injury and illness plagued 2015.

Momentum swings were a feature; it could have been Matosevic who led two sets to one, yet he double faulted on set point and lost the third set in a tiebreak.

Buoyed, Duckworth surged to a 3-0 lead in the fourth and extended that to 5-2, only for Matosevic to storm back thanks to better intensity and a reduction in unforced errors.

It was much the same pattern in the tiebreak; Duckworth moved ahead 4-1 but things got tense when the finish line neared.

Yet the Victorian couldn’t convert either of his two set points.

He and Mitchell are staying together this week in Melbourne, and have played countless times after growing up together and simultaneously emerging on the pro circuit.

Duckworth said they would most likely have dinner together tonight ahead of their weekend’s final.

Mitchell was hobbled physically and required the trainer in the fourth set, but nonetheless was too steady and confident for Mousley in the brutal conditions.

The powerfully-built South Australian stunned the No.4 seed in the opening set but became increasingly hampered himself; after receiving treatment for a shoulder injury, he later called the trainer out for a gluteal complaint.

The in-form Queenslander has now won 16 of his past 17 matches and stands on the cusp of a return to the world’s top 200.