As the highest remaining seed in the Australian Open Play-off, Arina Rodionova is the favourite to secure a main draw wildcard - she just has to fit her matches in around her upcoming wedding. 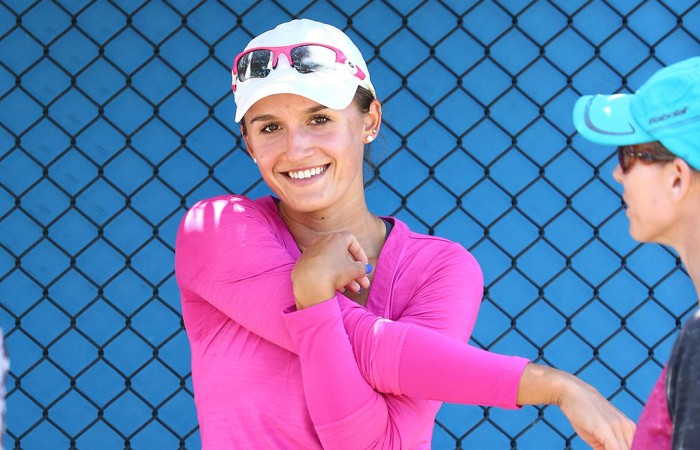 Arina Rodionova received just the birthday present she was after at the Australian Open wildcard play-offs on Tuesday, and with a bit of luck she might get the perfect wedding gift on Sunday.

The No.2 seed turned 26 the same day she defeated Angelique Svinos in the first round of the play-offs and could clinch a wildcard entry into the main draw of Australian Open 2016 the day after she marries Richmond Tigers AFL player Ty Vickery.

Rodionova is looking no further than Thursday’s quarterfinal against Victorian youngster Destanee Aiava, but doesn’t see an issue if she ties the knot on Saturday then happens to face a final the following day.

“I think both things will help distract me from the other. I know I have a wedding coming up and it kind of takes the pressure off my tennis, and once I’m playing, I’m focused on that and not on organising a wedding – it works both ways.

“It’s exciting, but as soon as that’s all over, I’ll be focusing on tennis.”

The draw has opened up for Rodionova after a day of upsets left her and Storm Sanders (No.6) as the only seeds remaining in the tournament.

Claiming the wildcard would be the perfect start to her 2016 campaign as she looks to improve her current singles ranking of 309th after concentrating on doubles earlier this year then suffering a serious knee injury that she’s only just recovered from.

“No one could really figure it out. I think I jammed it a little and caused some bone bruising and cartilage damage,” she said.

“I lost a lot of muscle and it took me a while to get it back, but I think it’s going pretty well.

“It doesn’t bother me now, so I’m really happy with that.”