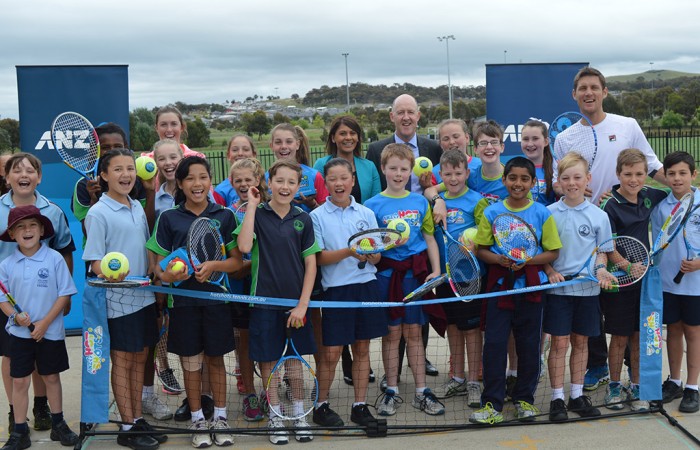 At Australian Open 2015, ANZ raised $50,000 through a social media campaign as part of the Tennis Cares initiative, to help local community programs in the Asia-Pacific region.

The money raised in January will go towards the construction of these new facilities in the ACT.

The schools’ existing facilities will be upgraded and resurfaced with child-sized courts, giving the students the opportunity to play on a regular basis and to keep them fit and active.

“This is a great opportunity to showcase an important community project and illustrate how tennis is having a positive impact in the ACT,” Triffitt said.

“These new courts for both schools will provide the opportunity for more children to embrace tennis during their curriculum and will ensure they keep fit and healthy while having fun on court.”

ANZ Tennis Hot Shots is fast becoming one of Australia’s most popular sport participation programs for the 5-12 age group with more than 190,000 children registered nationwide.

More than 82,000 school students across 1200 schools participate in the program as part of their health and physical education curriculum.

In ACT, 2600 participants are registered to ANZ Tennis Hot Shots, including 400 students from Holy Spirit and Good Shepherd Primary schools.

In addition, ANZ has recently launched a pilot program called Game Save Match to help teach children in ACT and NSW the importance of saving.

“As a proud sponsor of the upcoming Australian Open 2016, and through our association with ANZ Tennis Hot Shots, we are proud of the commitment we have made to grow the sport of tennis across the Asia-Pacific, as well as within our own local communities,” Stuart Hancock said.

“To further our commitment to tennis at the grassroots level, we have launched a pilot program called Game Save Match. This is an exciting initiative we are trialling in ACT and NSW until the end of November – educating kids the importance of saving and being rewarded for their effort.”