Beijing: Millman through, Stosur out

John Millman scored one of his biggest career wins to stun former world No.5 Tommy Robredo at the China Open, while Sam Stosur fell to 13th seed Andrea Petkovic. 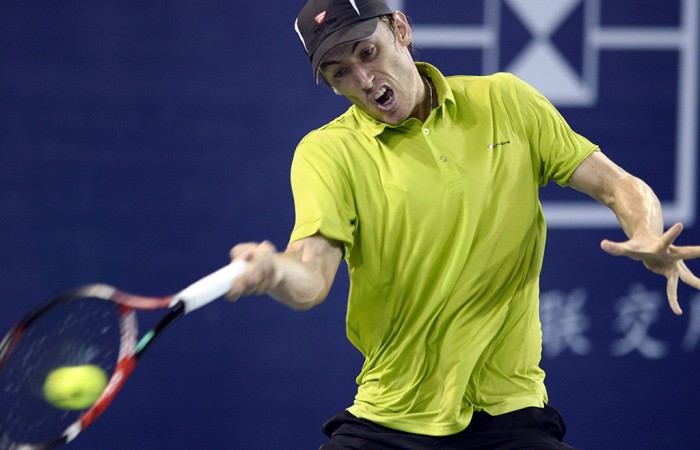 John Millman has scored one of the biggest victories of his career with a three-set upset defeat of Tommy Robredo in Beijing.

The victory takes his head-to-head record against the Spaniard to a perfect 3-0; Millman also beat Robredo earlier this year at Wimbledon, and in Sydney in 2013.

He moves through to the second round of the China Open, where he faces the winner of Tuesday night’s match between sixth seed John Isner and Austrian talent Dominic Thiem.

Playing in the second round on Beijing’s Moon Court, Stosur fell 6-2 7-5.

In the first set in particular, Petkovic was far too solid for the Aussie, controlling points with her flat, pacey groundstrokes and barely giving up an unforced error.

Stosur, meanwhile, struggled with her range – especially on her forehand wing – and found herself down a break when Petkovic beat her with a forehand passing shot winner.

“I had enough opportunities that I then wasn’t able to capitalise on, a few too many probably loose errors at the wrong time … against a player like Petko you might get away with it once or twice, but you can’t keep doing that and letting her back in.

“I thought I played decent but in the end probably just a little bit too loose.”

Although she never came back from that deficit in the first set, the second set was more encouraging for the Queenslander.

Stosur suddenly began cracking powerful forehands and broke serve in the opening game, quickly building a 4-2 lead as Petkovic lost all rhythm on her serve.

The German recovered to reel off three straight games, benefitting from another rash of errors from Stosur’s forehand wing.

Stosur successfully served to remain alive in the contest, levelling at 5-5 with a confident game.

Yet she couldn’t do it twice.

A double fault in the final game was followed by a Petkovic return winner, bringing up two match points for the German.

She needed only one; Stosur sent a forehand volley wide and sent Petkovic through to the next round.