Top seeds too strong for Dellacqua and Shvedova

World No.1 doubles pair Martina Hingis and Sania Mirza ended the US Open run of Casey Dellacqua and Yaroslava Shvedova with a polished performance in Sunday's final. 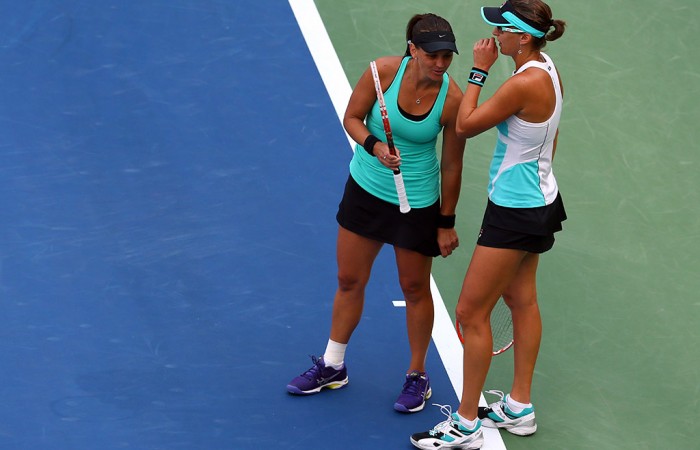 Martina Hingis and Sania Mirza have won their second straight Grand Slam title by beating Casey Dellacqua and Yaroslava Shvedova in the US Open final.

The top seeds had too much power and polish for the Australian-Kazakh pairing, winning 6-3 6-3 in one hour and 10 minutes.

They also won the Wimbledon title in July.

The victory caps a particularly impressive fortnight in Flushing Meadows for Hingis, who also won the mixed title with Leander Paes.

For Dellacqua, it was her sixth trip to a women’s Grand Slam doubles final, and her sixth loss.

“They’ve won not only Wimbledon, but Indian Wells and Miami; they’ve won a lot,” Dellacqua said.

“They’re a good team, so our expectations were that it was going to be a tough match. Of course we go out there believing we can win, but when you come up against tough opponents you I guess have to play your best tennis. And they produced some pretty good tennis today – I think they have all tournament.”

But there was a positive to come out of the defeat; with their deep US Open run, Dellacqua and Shvedova sealed their spot at the elite eight-team WTA Finals in Singapore.

Mirza’s ability to open up the court with heavy power and Hingis’ finishing ability at net proved the difference on a sunny Sunday in New York.

The final game of the first set exemplified just that – Mirza brought up a set point for her team with a scorching forehand winner and Hingis converted it by knocking off a volley.

“They’re only doubles players, so they always have time to practice and improve their game,” Shvedova observed.

“We have a lot of things we can improve. We’re already doing it step by step; maybe later, we can do it better.”

Shvedova was the more error prone of the fourth-seeded pair, and soon they were behind 2-0 in the second set.

Dellacqua did well to put her team on the board with a strong backhand winner en route to a service hold, but they were always trailing.

Not that it wasn’t competitive.

A wonderful 27-stroke rally ensued in the sixth game, in which Dellacqua controlled the court and yanked the Swiss and Indian all about the court before erring into net.

With that, Hingis and Mirza held for 4-2, and broke again – to love – when Mirza produced breathtaking forehand and backhand winners and Hingis smashed away an overhead.

Serving for the title, things got tight.

They broke back and then held two game points in the ninth game as Hingis and Mirza became frustrated with their mounting error tally.

But a winning lob from Mirza to save the second game point seemed to settle them.

At the other end of the court, Shvedova double-faulted to hand the top seeds their first championship point.

They clinched victory when Hingis struck a crisp volley winner.

A touching moment came in the trophy presentation; Shvedova consoled a disappointed Dellacqua, saying she had tried her best to deliver her partner her first Slam title and promising to keep working with her for a breakthrough.

“I’m OK, honestly. The fact that I can say I’m a six-time Grand Slam finalist is good for me,” Dellacqua said.

“Obviously I’d love to win them … but if I finish my career (like that), I’m OK with that.

“Hopefully one day I’m remembered for being a good competitor, a good player. That’s what’s important to me. It’s about going out there, doing what we do well, and someone’s gotta win, someone’s gotta lose.

“The fact I’ve made six finals, I’m really proud of that achievement as well.”