Sam Stosur will look to make her first Grand Slam quarterfinal in three years when she takes on Flavia Pennetta on Arthur Ashe Stadium on Monday. 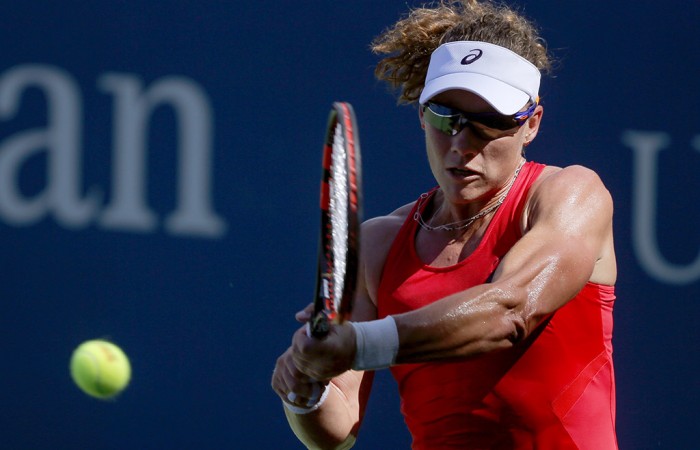 Sam Stosur must venture to uncharted territory to continue her pursuit of a second US Open crown.

Australia’s last hope once again, the 2011 champion is through to the second week at Flushing Meadows for the first time since 2012.

But after burying some mental demons with an impressive 7-5 2-6 6-1 three-set victory over 16th seed Sara Errani, Stosur now faces another of her Italian nemeses on Monday for a coveted quarterfinal spot.

Veteran Flavia Pennetta, a US Open specialist with a semifinal and four quarterfinal appearances on her CV, has more than had Stosur’s measure in all six previous meetings.

Despite spending most of her career ranked above the 33-year-old, Stosur has only ever managed to take two sets from the powerful world No.26 and knows she’ll need to raise her game to stay in the tournament.

“I really need to knuckle down and be clear with what I want to do and what tactics are going to work for me and how I can continually make that happen.

“I know that playing against her, I find it very difficult. She can take some of my weapons away, which is why I find it hard.

“So, yeah, I’m going to have to be really switched on.”

Although the 22nd seed hasn’t featured in the second week of a major since last year’s French Open, Stosur has already collected two titles in 2015 and her victory over Errani has further fuelled her confidence.

The Australian says having partnered Pennetta in the women’s doubles at Wimbledon last year, and also in Dubai, can’t hurt.

“There are little things you do pick up when you’ve played with somebody,” she said.