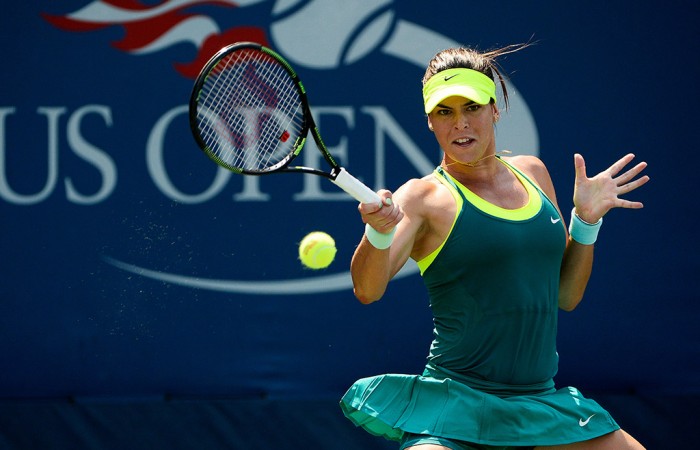 Update 4.05pm: Ajla Tomljanovic has fallen in three torrid sets in the opening round of the US Open on Tuesday.

The Croatian-born Australian dominated the opening stages of the match but faded to a 6-7(1) 6-2 6-4 defeat.

“I really wanted the win, maybe a bit too much and paid the price for it,” Tomljanovic said.

Tomljanovic streaked out out of the blocks on Court 14 on a warm and sunny day at Flushing Meadows, quickly building a 4-1 lead.

Although the Italian caught up to her, the big-hitting Tomljanovic dominated the ensuing first-set tiebreak.

Knapp broke early in both the second and third sets, advantages which she would not relinquish.

Receiving to stay in the match in the 10th game of the third set, Tomljanovic fired a forehand winner on the first point to give herself a glimmer of hope.

Yet Knapp, ranked almost 30 places higher at 34th and who had won nine of her past 13 matches, closed it out shortly thereafter.

“If I had maybe won this today, and scrapped it out, and won the next match, you never know,” Tomljanovic lamented.

“That’s how I made it to the fourth round of the French (Open in 2014). I never thought I’m going to be in the second week.

“You literally have to take it one match at a time and your confidence goes up without you even noticing.”

“I thought even thought I lost 6-1 in the third … the whole third set the first few games were definitely a battle, it could have gone the other way I had enough game points,” Gajdosova said.

“The first set I didn’t start very well, I was very nervous – it’s the first round of a Grand Slam, she’s a seed.

“I did however beat her last year so I was coming in confident … but she’s high ranked for a reason, she showed it today, she’s a very tough opponent.”