Sam Stosur has recovered from the brink to capture the WTA title in Bad Gastein and clinch her second tournament victory of 2015. 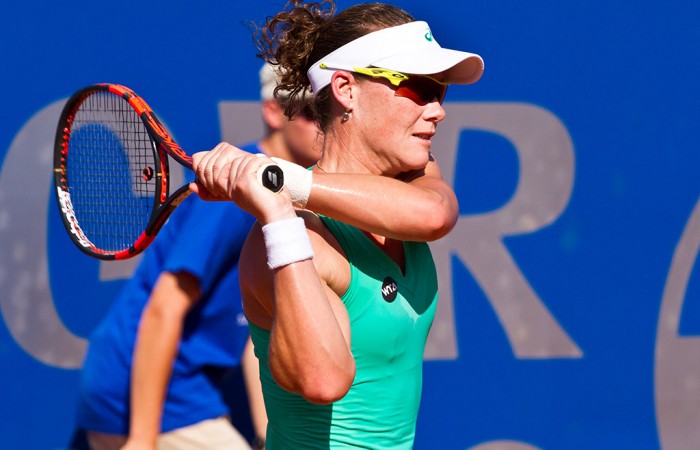 Sam Stosur has benefitted from a bold change of plan to clinch her second title of the season at the Bad Gastein WTA claycourt event in Austria.

In a confidence booster ahead of next month’s US Open, Stosur rallied from the brink of defeat to triumph 3-6 7-6(3) 6-2 over weary Italian third seed Karin Knapp in Sunday’s final.

Knapp had to back up from a sapping three-set semifinal win earlier in the day against Italian top seed Sara Errani and faltered while serving for the championship at 5-4 in the second set.

“It wasn’t easy to play five hours today but I was really fighting. I just missed some chances and she used hers,” Knapp said.

Stosur sympathised with her opponent but was happy to take the spoils – her eighth career title plus $51,750 and a rise from 23rd to 21st in the world rankings a month out from the start of the final Grand Slam event of the year.

“It’s not ideal to be playing a semifinal and final in one day, a two-and-a-half-hour match in the morning then another two and a half hours in the afternoon,” the Australian said.

“But unfortunately that’s just what happens with the weather sometimes – and she did serve for the match, so she wasn’t doing too badly either.”

At one point, Stosur trailed 6-3 4-2 and down further break points as Knapp carried the momentum of her big semifinal win into the title match.

“It was a very hard match today,” Stosur said.

“I was getting completely outplayed in that first set and even though she was up in the second set too, I started to feel like I was doing a little better.

“Obviously she served for the match but I hung in there, got that set then played better and better from there.”

Stosur eventually prevailed after two hours and 28 minutes, the victory vindicating the 2011 US Open champion’s decision to return to her preferred clay courts after a first-week loss on Wimbledon’s hallowed lawns.

For the past decade, Stosur has returned home to Australia after Wimbledon to freshen up for the American hardcourt season.

This year, though, the one-time world No.4 opted to take her break before Wimbledon, hoping to maximise her opportunities on European clay.

The 31-year-old did so, adding the Bad Gastien trophy to her title from Strasbourg in May.

Stosur will now head to the US on the cusp of the world’s top 20 as she attempts another deep run in New York from 31 August.