Australia have kept its Davis Cup title hopes alive with a clutch doubles win in its clash against Kazakhstan in Darwin. 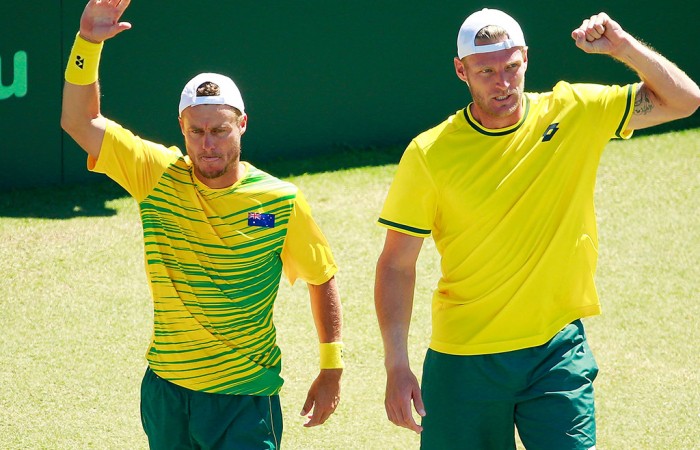 Australia have kept its Davis Cup title hopes alive with a clutch doubles win in its clash against Kazakhstan in Darwin.

Trailing 2-0 in the quarter-final tie after Thanasi Kokkinakis and Nick Kyrgios lost their singles matches on Friday, Australia had no room for error.

Lleyton Hewitt and Sam Groth didn’t let their country down, with the pair combining to beat Andrey Golubev and Aleksandr Nedovyesov 6-4 7-6(4) 6-2.

Australia still trail 2-1 in the tie, meaning they need to win both of their singles encounters on Sunday if they are to reach the semifinals.

Hewitt and Groth celebrated with a big hug after wrapping up the match in two hours, 25 minutes.

“It’s up there,” Hewitt replied when asked what the win meant to him.

“I haven’t played too many doubles matches at 2-0 down when the pressure’s on.

“Sam and I combined really well today. This is Grothy’s first win in a live rubber, so it’s fantastic to be out here to enjoy it with him.”

Groth’s powerful serve was crucial, but Hewitt’s sharp returns proved to be the ultimate difference.

“We didn’t want it to be all over today,” Groth told host broadcaster Seven Network after the match.

“Thankfully Lleyton put me on his back and carried me there.”