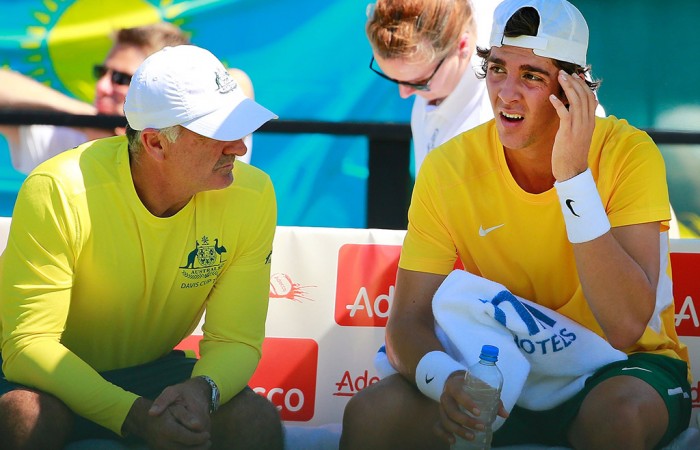 Update 4.20pm: Australia trails Kazakhstan 1-0 in its Davis Cup quarterfinal in Darwin after Thanasi Kokkinakis was overwhelmed by Kazakh No.1 Mikhail Kukushkin.

Nick Kyrgios has the chance to level the tie when he takes on Aleksandr Nedovyesov in Friday’s other singles rubber, with Sam Groth and Lleyton Hewitt to team up for Saturday’s doubles.

Kokkinakis made a nervous start to Friday’s match, needing to save two break points on his first service game before he could get on the board.

Kukushkin managed to snare a vital break on Kokkinakis’ next service game, and he broke the youngster yet again early in the second set.

Kokkinakis launched a brief fightback in the second set before being broken again, and the world No.69 lost the first 12 points of the third as Kukushkin raced towards victory.

The young Australian did manage to stave off three match points in the eighth game, erasing a 0-40 lead with big serving to force Kukishkin to serve out the match.

The Kazakh had no such troubles when he stepped up to the line to do so, closing out the game at love – and the match – with a forehand winner.

Kokkinakis struggled to keep pace throughout the contest during which his first serve abandoned him.

“I wasn’t able to find my game. And when I found it in the second set, I got broken straight back, which killed me,” Kokkinakis said.

“I didn’t find my rhythm today.