UPDATE: Nick Kyrgios has safely joined fellow Australian big gun Bernard Tomic in the third round at Wimbledon, with both seeds coming through straight-sets victories. 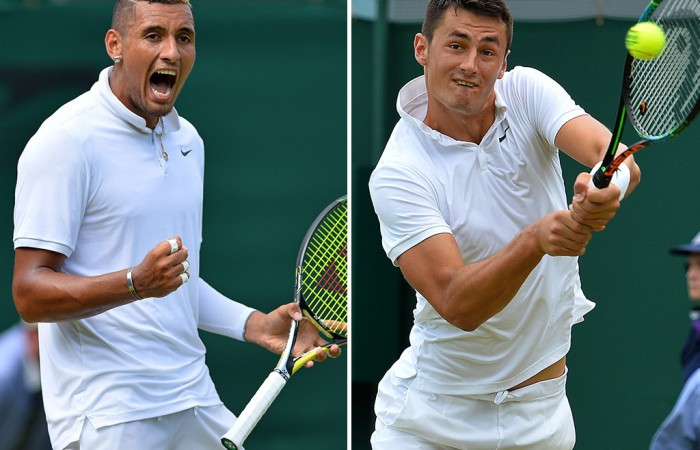 Following straight-sets victories Tomic and another Aussie seed in Sam Stosur, Kyrgios recorded a 7-6(5) 6-3 6-4 victory over Juan Monaco on Wednesday.

“I thought I dug out the first set well. Obviously lifted my energy towards the second and third,” Kyrgios said.

“He’s capable of playing some pretty good tennis. He’s been in the third round here a couple times. I was really surprised. He was hitting pretty big, pretty flat. I thought to beat him in straight sets is a pretty good performance.

“I thought I served real well today. My energy was really good, as well.”

His victory booked a third-round rematch on Friday with big-serving seventh seed Milos Raonic, the Canadian who ended Kyrgios’ magical run last year in the quarterfinals.

“I’m excited. Obviously to play a guy like that, he’s pretty much at the top of the game. After last year’s performance against him, I’m confident I can do well,” Kyrgios said.

Tomic earlier on Wednesday overcame London’s extreme heat and humidity to set up blockbuster showdown with world No.1 and defending champion Novak Djokovic.

Tomic complained of dizziness as temperatures nudged 30 degrees but showed true grit to grind out a 7-6(3) 6-4 7-6(5) second-round win over talented young Frenchman Pierre-Hugues Herbert on Wednesday.

Australia’s 27th seed required medical assistance late in the third set but dug deep to prevail after one hour and 59 minutes.