Sam Stosur's grass revival has continued with a second-round Wimbledon win, and she'll now get the chance to turn the tables on Australian Open conqueror Coco Vandeweghe. 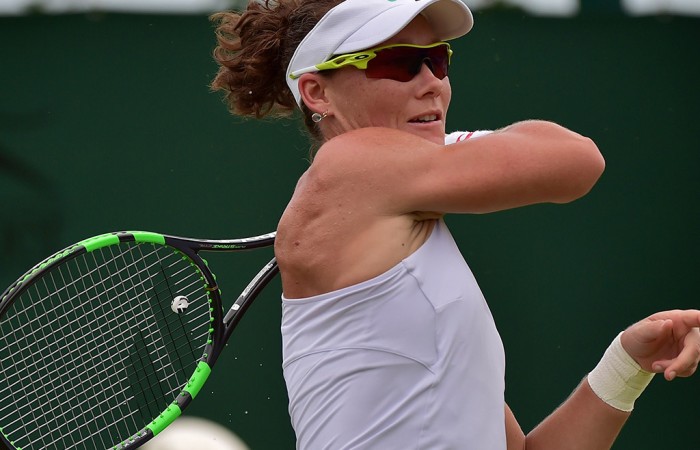 Sam Stosur’s grasscourt revival has continued with a comfortable second-round win at Wimbledon.

Suddenly, after being without a win on the surface in 12 months, the Australian No.1 is into the third round at the All England Club for only the third time in 13 attempts.

“I’m very happy. It’s great to be in the third round and I’m enjoying it out there,” Stosur said.

“So that’s the main thing – and I’m winning at the same time, so that’s good.”

The former US Open champion next faces big-hitting American Coco Vandeweghe – who ousted 11th-seeded Czech Karolina Pliskova – on Friday with hopes of making the second week of her least productive major for the first time.

Stosur made a flying start on Wednesday, breaking Radwanska – the younger sister of 2012 finalist and former world No.2 Agnieszka – twice to race to a 5-1 lead in the opening set.

She faltered trying to close it out before clinching it at the second attempt with an unreturnable wide-angled serve.

Australia’s 22nd seed fell behind 3-1 in the second set, but broke the world No.107 twice in a row to regain control before moving through to the last 32 after just 79 minutes.

“There’s obviously things that I felt like I could have done a little bit better out there today,” Stosur said.

“But even when I got down 3-1 in that second set, I knew I wasn’t moving forward enough and being aggressive enough and I got that break straight back.

“That kind of like kicked me back into gear and I got the set 6-4.

“I didn’t do it all the time, but I felt like when I really needed to I was able to do the right thing.”

Stosur’s effort matches runs to the third round in 2009 and 2013, when she lost to eventual runner-up Sabine Lisicki in three sets.

Stosur beat Vandeweghe en route to the title in New York four years ago, but has lost their past two encounters, including in straight sets at the Australian Open in January.