UPDATE: Daria Gavrilova ensured Australia had one winner at Eastbourne with a thrilling victory over Camila Giorgi. Sam Stosur, Casey Dellacqua and Jarmila Gajdosova all fell on Tuesday. 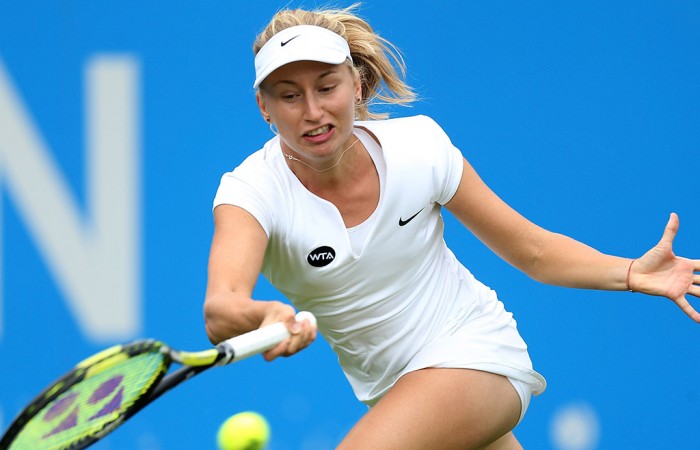 The ailing Czech’s late withdrawal not only gifted Gavrilova an unexpected inclusion in the Premier-level Wimbledon warm-up event as the “lucky loser” from qualifying, but also pitched her into Kvitova’s privileged position atop the draw.

A first-round bye was among the perks.

But not satisfied, the 21-year-old ex-world No.1 junior next plays former French Open finalist Sara Errani for a place in the quarterfinals – not to mention a truckload of rankings points – after clinching a memorable comeback win over another Italian, Camila Giorgi.

In surviving a second-set match point, Gavrilova offered a glimpse of why the Russia-born rising star has been earmarked as Stosur’s heir apparent and future Australian No.1.

For now, though, the 41st-ranked Gavrilova remains the humble youngster who can hardly believe her good fortune.

“Obviously I was pretty lucky having a bye and then saving a match point. It’s a good tournament for me. I took the opportunity.”

Earlier on Tuesday, Sam Stosur’s loss means she will head to Wimbledon without a grasscourt win under her belt.

After receiving a first-round bye, the Australian No.1 went down 7-5 7-6(0) to Bulgarian qualifier Tsvetana Pironkova.

In her first outing since falling to Maria Sharapova in the third round of the French Open, Stosur was broken six times – half of her service games – in the one-hour, 40-minute encounter.

Casey Dellacqua and Jarmila Gajdosova were also eliminated on Tuesday.