UPDATE: Australian Daria Gavrilova has exited the French Open in tears, retiring from her second-round match with an abdominal strain, while Ajla Tomljanovic also fell. 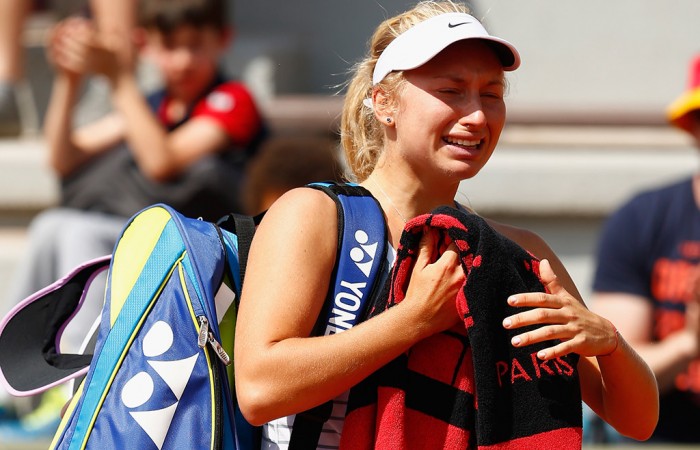 Daria Gavrilova is confident of being at full fitness for Wimbledon despite making a teary French Open exit with an abdominal tear.

Australia’s rising tennis star was forced to retire from her first-round clash with Wimbledon finalist Sabine Lisicki after dropping the opening set 6-1.

The 21-year-old Gavrilova struggled from the get-go, having to fight off four break points before finally dropping serve after an epic 10-minute opening game.

She eventually called it quits 29 minutes into the match when the pain became unbearable and she could no longer serve.

“I mean, obviously it’s worth it but I just felt too much pain.”

The world No.46 first suffered the injury during her gruelling run from qualifying to the semifinals of this month’s Rome Masters and said it flared again in her first-round win in Paris.

Despite an ultrasound revealing a one centimetre tear, Gavrilova never considered not taking to the court to try to reach a Grand Slam third round for the first time.

“I actually thought I was going to cope with the pain but in the end I couldn’t,” she said.

It was a disappointing exit for the former world junior champion who had upset defending French Open champion Maria Sharapova in Miami this year and then conquered former winner Ana Ivanovic in Rome.

“I was pretty confident coming into Roland Garros and was playing well, but it’s very sad,” Gavrilova said.

The talented youngster also withdrew from the doubles and needs two full days’ rest, but said she should be fine to contest the Wimbledon lead-up event next month at Eastbourne.

“I can basically do everything but serve but I have to take care of my ab,” Gavrilova said.