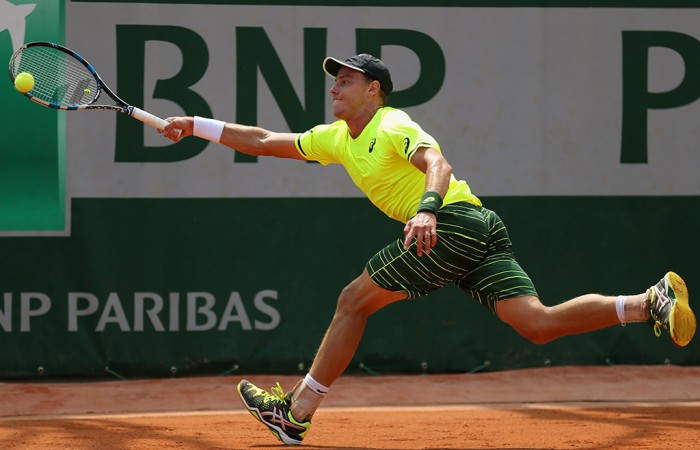 The 23-year-old’s match point came in the 10th game of the third set, but Arnaboldi smoked the line with a daring off-forehand winner before taking the next two break-free sets in tiebreakers.

Duckworth managed to hold for 21 straight service games over three hours before being broken three times in the deciding set to miss out on a second-round shot at US Open champion Marin Cilic.

He ultimately paid the price for converting only two of 16 break-point opportunities on the Italian’s serve.

The 23-year-old will be bitterly disappointed after arriving in Paris riding a wave of confidence after reaching the quarterfinals of last week’s Nice Open ATP tournament.

After suffering final-round qualifying heartache at Roland Garros in 2013 and 2014, he didn’t have to endure qualifying or seek a wildcard this year after climbing to 82nd in the rankings.

Duckworth ventured to far flung Challenger events in An-Ning, China and San Luis Potisi, Mexico over the past two months to clinch his direct entry to the claycourt major.

He looked on course for a well-deserved place in the second round alongside more heralded countrymen Bernard Tomic, Nick Kyrgios and Thanasi Kokkinakis after going two sets up on Tuesday.

He celebrated his two-set advantage, after producing a dazzling backhand return pass on set point, with the lawn mower.

But Duckworth was forced to contain his excitement as Arnaboldi clawed his way back into the contest before finally prevailing after four hours and 10 minutes.

It was his fourth five-set loss at the majors.