Sam Stosur has beaten Estonia's Kaia Kanepi to reach the third round of the Madrid Open, but fellow Aussies Casey Dellacqua, Bernard Tomic and Thanasi Kokkinakis all went down. 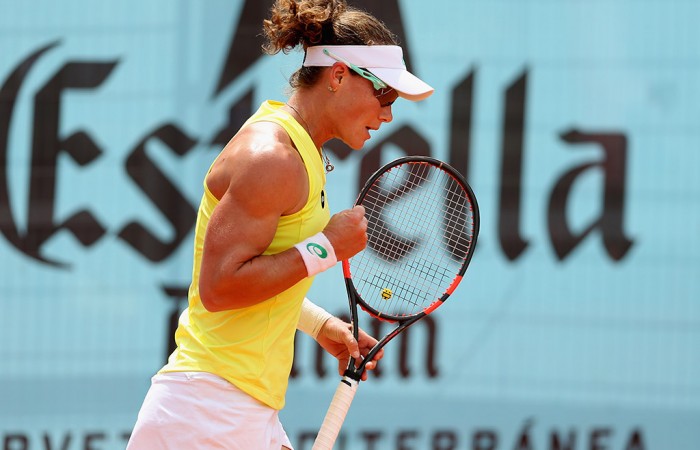 Sam Stosur has beaten Estonia’s Kaia Kanepi 6-3 6-2 in the second round of the Madrid Open, but fellow Australian Casey Dellacqua lost to Poland’s Agnieszka Radwanska 6-2 6-1.

Stosur’s win on Monday sets her up in the last 16 for a battle with another former US Open champion, Russian Svetlana Kuznetsova.

It is the first time in 2015 that Stosur has won consecutive matches, and she did so with a dominant display against Kanepi, slamming seven aces and winning more than 70 per cent of points on both her first and second serves.

Denmark’s Caroline Wozniacki, meanwhile, set up a third round meeting with Radwanska as her promising start to the clay court season continued with a 7-5 6-0 win over American qualifier Christina McHale on Monday.

The world No.5 reached the final in Stuttgart last month and had too much for McHale after battling back from 4-2 in the first set.

Radwanska had an even more comfortable route into the last 16 as she needed just over an hour to dispose of Dellacqua.

The Pole is playing her first tournament since ending an ill-fated four-month spell with 18-time Grand Slam champion Martina Navratilova as her coach.

Kuznetsova battled past home favourite Garbine Muguruza 6-3 5-7 7-5 after over two-and-a-half hours on court.

Meanwhile, Bernard Tomic’s struggles on clay have continued just three weeks out from the French Open after being knocked out of the Madrid Open by Italian Luca Vanni.

Fellow Australian, qualifier Thanasi Kokkinakis, also went out in the first round after succumbing to big-serving American Sam Querrey 6-4 6-7(5) 6-3.

Kokkinakis saved a pair of match points in the second set to send it into a third, but despite battling gamely, he ultimately fell to the world No.39.

The 22-year-old has now lost his past three matches.

Tomic still has a fortnight up his sleeve – during which he will contest the Rome Masters and Nice Open – to find form on clay ahead the French Open in late May.