Molik in for the long haul

Alicia Molik is determined to get Australia's Fed Cup team back into the top tier of women's tennis after their surprise World Group Play-off loss to the Netherlands. 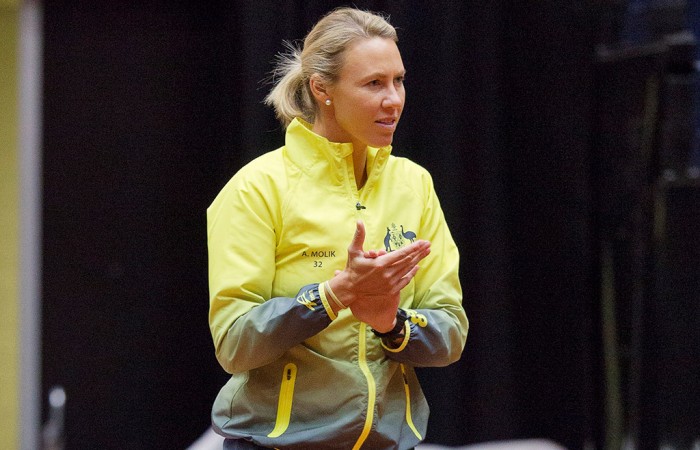 Alicia Molik has no intention of stepping down as Australia’s Fed Cup captain despite their surprise World Group Play-off loss to the Netherlands, saying she’s determined to get back into the top tier of women’s tennis.

Molik was shocked at the 4-1 defeat to the lesser-ranked Dutch outfit in ‘s-Hertogenbosch, but said it hadn’t dented her pride at leading the team nor her desire to continue her role.

“Absolutely I want to stay on as captain,” she told AAP on Sunday.

“I’m so passionate about making this team the best that I possibly can and each individual player is a real pleasure to work with. They’re always hungry to excel and hungry for more.

“I absolutely want to stay and I’m very pleased to be representing our nation.”

Australia, who have been demoted to the second-tier World Group II for the first time since 2012, will start their 2016 campaign to get straight back into the top tier in February and Molik is ready to get to work.

“I’d like to do everything possible to get us back into the World Group,” she said.

“I’ve got some work to do, I think we all have little bits that we can improve in making ourselves at a better level next time.

“We all want to look for improvements and I’m no different to the players.”

Molik, who took over the captaincy in 2013, has the support of the players.

“Alicia has been fantastic. She is always really positive,” Casey Dellacqua told AAP.

“On the whole I do really believe we belong in the top echelon of teams in the world.

“I’ve been very grateful to have (Alicia) on the side of the court, personally for me to make sure that I’m in a good headspace.”