Sam Stosur has opened her ninth campaign at the Family Circle Cup with a comfortable victory while fellow Aussie Casey Dellacqua fell to Belinda Bencic. 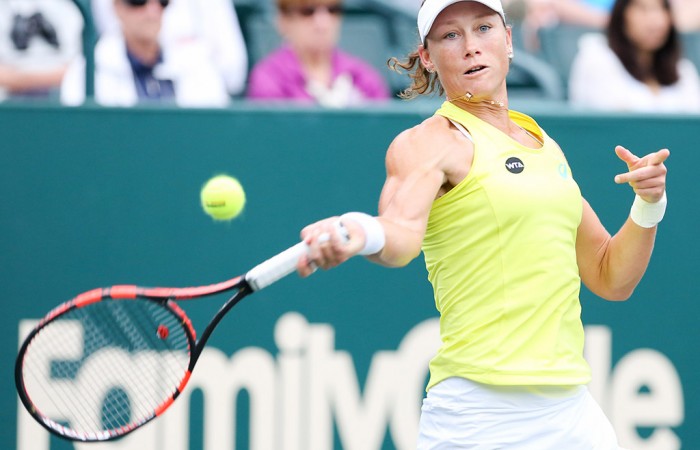 Sam Stosur has opened her ninth campaign at the Family Circle Cup with a comfortable victory as she builds towards next month’s French Open.

Stosur, 31, enjoyed a straight-sets defeat of Bulgaria’s Sesil Karatantcheva 6-2 6-4 at the WTA claycourt tournament in South Carolina, though countrywoman Casey Dellacqua suffered a setback with a first-round loss.

Dellacqua, 30, was swept aside by Swiss 12th seed Belinda Bencic 6-1 6-2 in a disappointing display.

Stosur, the 2010 Family Circle Cup winner, said the tournament was a highlight of her calendar.

“It’s certainly one of, if not my favourite week of the year to be out on tour,” she said after the win.

“It’s one of those things … as soon as I fly in, I instantly feel good about being here.”

The Queenslander also reflected on how she strongly considered retiring last year.

The 2011 US Open champion and former world No.4 endured a frustrating 2014 campaign marred by losses to finish outside the top 20 for the first time in six years.

“A year ago I really was struggling, I wasn’t happy with the way I was playing,” Stosur said.

“I wasn’t necessarily enjoying playing, and when you’re not getting the results that you necessarily want or believe that you’re capable of it gets tiring to be out here all the time.

“I certainly struggled with that for quite a few months last year. I’m still not where I necessarily want to be, but I’m always kind of working towards that and trying to work on my game.”

Stosur will face Lara Arruabarrena in round two after the Spaniard defeated Turk Cagla Buyukakcay in straight sets 6-2 6-2.