UPDATE: James Duckworth has surprised Dominic Thiem to advance to round two of the BNP Paribas Open at Indian Wells, where Thanasi Kokkinakis later joined him. 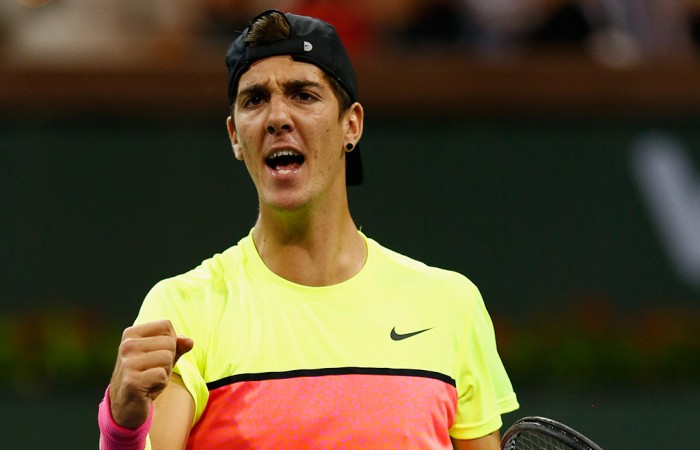 James Duckworth has surprised Austria’s Dominic Thiem to advance to the second round of the BNP Paribas Open at Indian Wells in California.

Later on Thursday, wildcard Thanasi Kokkinakis joined him in the second round, beating Germany’s Jan-Lennard Struff 7-6(3) 6-3.

Kokkinakis won in less than 90 minutes, sending down 10 aces en route to victory over the world No.73.

“I knew he was a great player. I got killed by him last year I think 2 and 1 the score was at a Challenger in Germany but obviously I knew coming here I’d played a lot of matches, (I was) feeling good, had some good tough wins,” he said.

“But I had to put it together on the day and I served really well, which helped me.”

Becoming the first 18-year-old to win a main draw match at Indian Wells since compatriot Bernard Tomic and American Ryan Harrison in 2011, Kokkinakis will next face 23rd seed Guillermo Garcia-Lopez.

Having now won three matches in a row after coming through the qualifying rounds, Duckworth appears set to crack the world’s top 100 for the first time.

The New South Welshman slammed seven aces and no double faults throughout the straight-sets victory; he won 82 per cent of his first serve points and not once faced a break point.

His next opponent is No.28 seed Fernando Verdasco of Spain.

On the women’s side, Jarmila Gajdosova won the first set but ultimately fell in three to Italian veteran Roberta Vinci.

“Mentally and physically just out of gas. Roberta stepped it up in the second and third set so good luck to her in her upcoming matches.

“Few days off now, time to go home to Washington, D.C. Spend some time with my fiancé, do some fitness and get ready for Miami in couple weeks.”

In other Aussie results, Marinko Matosevic and Sam Groth both fell in tight matches in the Californian desert.