Lleyton Hewitt and Sam Groth have fallen frustratingly short of the finish line against Czech Republic, with a five-set Davis Cup doubles loss. 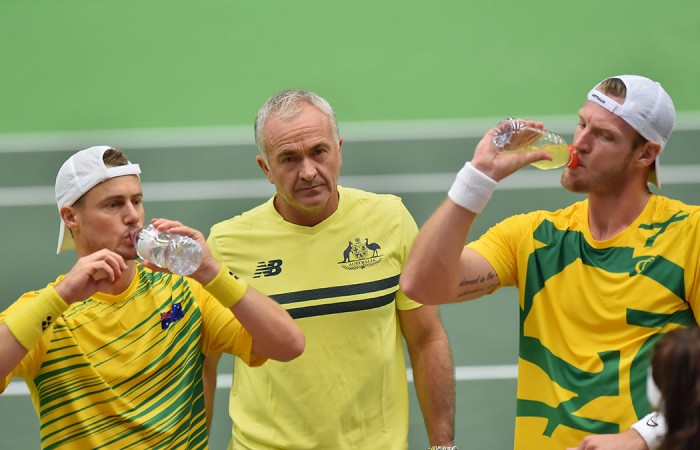 Lleyton Hewitt and Sam Groth have fallen frustratingly short of the finish line against Czech Republic, with a five-set Davis Cup doubles loss forcing the World Group tie in Ostrava into a tense final day.

Australian No.1 Bernard Tomic can secure the win when he faces Lukas Rosol first-up on Sunday (starting 2330 AEDT) while teenager Thanasi Kokkinakis is scheduled to play Vesely in the second match, though Masur has the option of playing Hewitt or Groth.

The pair started brilliantly in Saturday’s doubles but fell away against the improving Czechs in the closing two sets, with Groth in particular seeming to lose his way and smashing a racquet over his knee in the frustrating final set.

The visitors are still strongly placed to defeat the 2012 and 2013 champions, who are missing top gun Tomas Berdych, and Hewitt is backing in-form Australian spearhead Tomic to finish the job.

“Everyone’s disappointed, especially Sam and myself, but Bernie’s hitting the ball really well at the moment and we’ll be doing everything to get him over the line tomorrow,” Hewitt said.

Tomic and Kokkinakis won singles matches on Friday to give Australia an unlikely a 2-0 lead.

Masur’s bold decision to play 18-year-old Kokkinakis in the opener paid off spectacularly as the world No.133 came from two sets down to defeat Rosol on Friday, allowing Hewitt and Groth to come in fresh for the doubles.

Beautifully blending Hewitt’s guile with Groth’s power, the pair raced through the first set but ultimately couldn’t make fresh legs count against Vesely, backing up from a straight-sets defeat to Tomic, and world No.247 Pavlasek.

The Czech duo rallied back from 3-0 down to win the second set but Australia regained control to take the third, with the passionate Hewitt lapping up the occasion in his 39th tie.

The visitors were three points away from winning the tie in the fourth-set tiebreaker but careless errors allowed the Czechs to pounce and force a deciding set.

Riding the raucous Cez Arena support amid relentless Czech horns and drums, Vesely and Pavlasek raced away with the final set to win in three hours and 14 minutes.

“We came out and played so well for the first set and a half and they were a little bit off but they lifted their game and got better and better as the game went on,” Hewitt said.

“Having said that, we lost the second and fourth sets in tiebreaks so if we win one of those, we win the match comfortably.”

Tomic will be heavily favoured against world No.31 Rosol, who has lost 10 of 11 matches played this year.

Masur, who has assumed the captaincy until the retiring Hewitt takes the role next year, said Davis Cup rookie Kokkinakis was a chance to play in a potentially decisive-fifth rubber.

“It could all be on his shoulder and at the moment those guys are training so at this stage, it (the singles lineup) will be as planned,” Masur said.

The winner of the tie will face Italy or Kazakhstan in the quarter-finals.