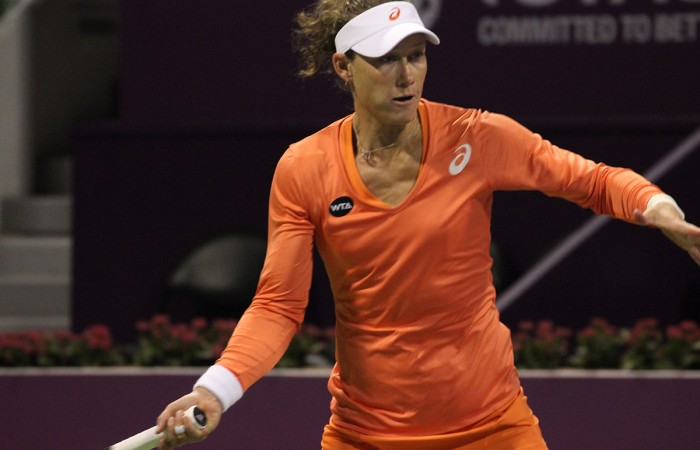 Casey Dellacqua pushed world No.17 Venus Williams to three sets at the Khalifa International Tennis and Squash complex. Wearing leggings and long sleeves, the American warmed to the challenge in the chill night air and cranked out a 3-6 6-2 6-1 victory.

“I had some chances and opportunities, so obviously I’m disappointed,” the West Australian said. “Venus is a quality opponent, a tough opponent and in the end she found her rhythm.

“When you play girls like that, I was prepared for her to be coming at me, that’s what quality players do. I had a good match last week, and another good match this week, so I’m playing good tennis,” the world No.34 said.

Dellacqua reached the second round at the US$2.5 million event in Dubai last week, falling in three close sets to Czech Lucie Safarova.

Tonight Safarova extended her win-loss record over top ranked Aussie Sam Stosur to 10-3, avenging a recent loss in Sydney with a 7-6(3) 6-4 victory.

The first set was a brutal 64-minute tussle, while Stosur clawed back from 2-4 to 4-4 in the second set, allowing Safarova just enough rope to extract the win.

“Playing Lucie, it’s always a hard match,” Stosur said. “It’s another tiebreak, another close one. I feel like I am hitting the ball well, and playing well enough, but not at the important points. “

Despite losing second round in Dubai and first round in Doha, Stosur said she was happy with her game at present and was remaining positive for the year.

“I’m playing some decent matches, I’m not winning quite as many as I want yet but I don’t feel like I’m too far off,” the former US Open champion said.

Australia still has a representative in the field, as Russian-born Daria Gavrilova overcame a slow start against Su-Wei Hsieh to claim a 1-6 6-3 6-4 victory in the final qualifying round. The 20 year old is, ranked 112, will play Ukranian Elina Svitolina on Tuesday.

Defending champion and Dubai winner Simona Halep withdrew, citing a left rib injury. “Before the tournament I had a big pain in my rib, it was really tough to move my body,” the Roumanian explained. She said the injury subsided during the Dubai tournament, where she defeated Karolina Pliskova in the final, but she still felt a niggle in her side and did not want to risk further damage. “Normally, it’s 10 days I need to recover my rib and then I should be okay to play,” Halep said.

Petra Kvitova is top seed in Doha, with Dane Caroline Wozniacki leading a lower half of the draw that includes wildcard Victoria Azarenka, twice a winner in Doha and undefeated in 11 consecutive matches.

The resurgent Belarusian tore through German Angelique Kerber in their first round encounter 6-0 6-3, and was in a bubbly mood post match.

“I feel like, especially in the first set, I really stepped up with the right attitude, with the right game plan and really executed it well,” the 2012 and 2013 Australian Open winner said.

2014 was a difficult year with injury and personal challenges pushing down her ranking, but Azarenka said she was feeling good about her prospects.

“I always talk day-by-day and I don’t know what’s going to happen in the future, but right now I’m feeling good. I’m really paying a lot of attention for prevention and really working hard on my body to keep it strong, to keep it loose.”