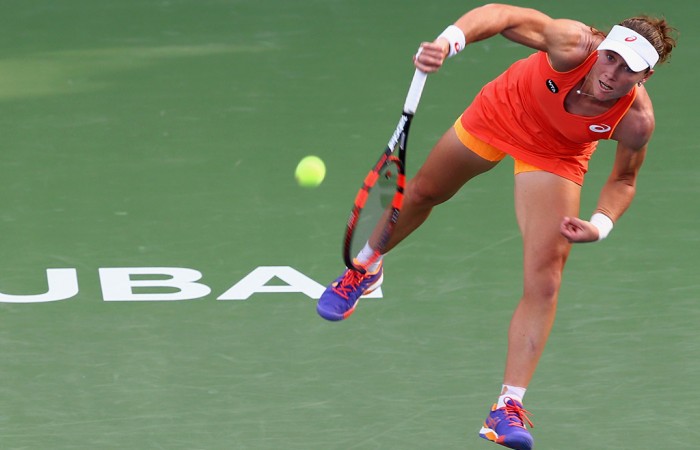 Caroline Wozniacki served for the match three times before finally beating Sam Stosur 4-6 6-1 7-5 in the second round of the Dubai Duty Free Tennis Championships.

The third-seeded Dane led 5-2 in the third set on Tuesday but struggled to close it out.

“They do say third time lucky, right?” Wozniacki said. “I was hoping for that.”

Wozniacki has been ill with a headache, sore throat and hoarseness since arriving in Dubai, and on the first point of the match a recurring left knee problem surfaced.

After losing the first set, the former top-ranked player took a medical time out to have her knee treated.

“I thought I was long gone after that first set,” Wozniacki said.

“I’m happy to be through and to the next round.”

Meanwhile, Australian Casey Dellacqua was also sent out in the second round, suffering a 6-7(6) 7-6(4) 7-5 loss to Czech Lucie Safarova.

Fourth-seeded Ana Ivanovic, out with a broken toe since a first-round exit at the Australian Open, beat Sabine Lisicki 6-0 6-3, while fifth-seeded Agnieszka Radwanska defeated Caroline Garcia 6-3 2-6 6-3.

Also advancing was 13th-seeded Carla Suarez Navarro of Spain, who withdrew from Sunday’s final in Antwerp against Andrea Petkovic with a neck injury.