Gajdosova tipped to soar in rankings

Jarmila Gajdosova's Fed Cup teammates and rivals believe she's bound for the world's top 20 after a standout performance in Australia's loss to Germany. 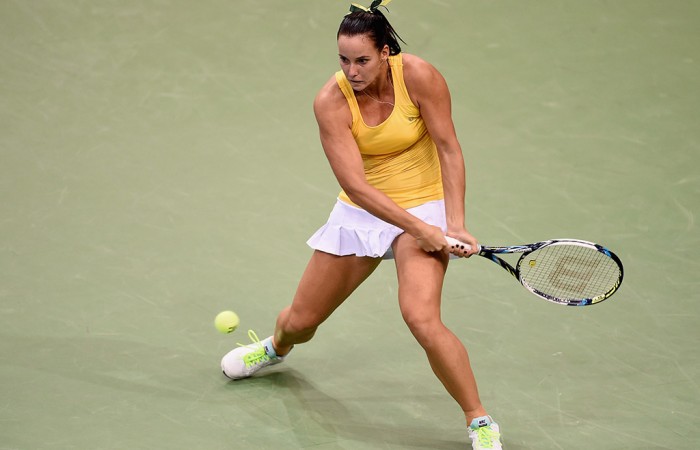 Jarmila Gajdosova’s Fed Cup teammates and rivals believe she’s bound for the world’s top 20 after a standout performance in Australia’s loss to Germany.

Gajdosova defeated German No.1 Angelique Kerber and pushed tie hero Andrea Petkovic all the way in a 4-1 loss in Stuttgart that ended Australia’s 2015 World Group campaign.

It continued an encouraging comeback from the 27-year-old, who less than a year ago was ranked 334th in the world after battling a debilitating bout of mononucelousis, more commonly known as glandular fever.

Gajdosova has steadily climbed back up the rankings with with wins over 12th-ranked Petkovic and fellow top 20 player Dominka Cibulkova in Sydney last month, helping her climb to 54th.

After one of the wins of her career against Kerber on day one, she pushed 12th-ranked Petkovic to 8-6 in the final set on Sunday, leaving the German star in no doubt Gajdosova could surpass her previous high ranking of 25, set in 2011.

“She has a tremendous amount of talent and sometimes I’m not sure she knows it herself, if she’s aware of how much talent she has and how much trouble she gives the top players.

“She just needs to stay patient because she’s going to win big matches with the game she has and the weapons she possesses.”

Australian captain Alicia Molik selected Gajdosova for singles in Stuttgart ahead of the higher-ranked Casey Dellacqua and felt the performance would give her a “spring in her step” for the rest of the season.

Teammate Sam Stosur said Gajdosova had shown she was capable of beating anyone in the world on her day.

“Any of the seeds at the slams don’t want to be playing Jarka in the first round,” Stosur said.

A fit-again Gajdosova is growing in confidence but reluctant to take anything for granted in a career which has featured its fair share of illness and injury setbacks, along with personal heartbreak following her mother’s death in September 2012.

“It took me a long time to come back to where I am now, so I really want to just enjoy playing and get better physically still,” Gajdosova said.

“There’s no pressure really. I’ve been through so much bad stuff and so many tough times that there’s no point of me putting (rankings) goals on it.

“I just want to keep working and try to keep winning.”