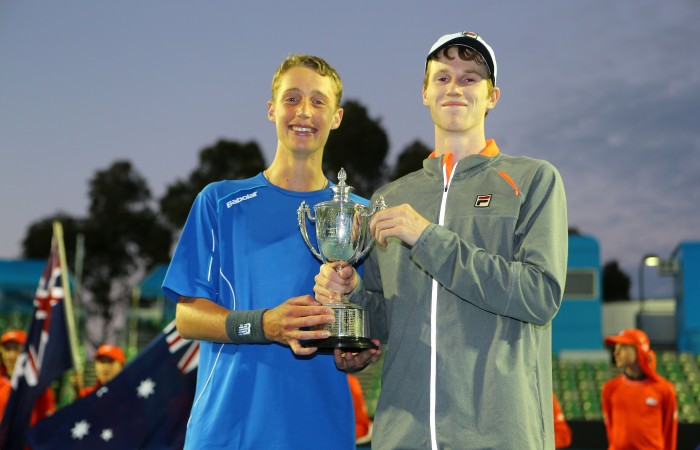 The pair clawed their way back from a first-set thrashing to defeat Hubert Herkacz from Poland and Slovakian Alex Molcan 0-6 6-2 [10-8] on Friday night.

The jubilant duo explained post match that it was by complete chance that they even played the Australian Open as a team.

“I was supposed to play doubles with a Korean kid, Duck Hee Lee, and that day, when the acceptances came out, he said he was playing with someone else,” Polmans said

“So I messaged Jake on Facebook and asked him if he had a doubles partner for Traralgon and the Australian Open and he said ‘no let’s play’. I thought, that’s great, I’m playing with another Aussie guy.

“We somehow drew the No.1 seeds in the first round and I thought ok, let’s play one match and see how it goes. We managed to scrape through in a super (tiebreak) and somehow just kept it rolling from there but our slow starts definitely didn’t help.

“We worked really well as a team under pressure.

“It was just really fun to play with him and to win a junior Grand Slam in doubles is obviously a great thing. To do it in Australia in front of my friends and family was great as well.”

The pair made a habit out of winning tight matches right throughout the tournament. Delaney attributed it all to how they handled the key moments.

“It feels pretty good, I think we just toughed out a lot of matches this week, that is what it came down to really.

“There was some teams that were very good and we just managed to scrape through by a couple of points. I think we just played the big points right, that’s all really.”

Delaney also said that, although it has been a while, this was far from their first time playing together and that their teamwork and positivity are two of the main assets that have lead to their success.

“We have actually played a lot in the past.

“In 12’s and 14’s we played tons of tournaments together, a few nationals, we won a couple of nationals but then we stopped playing, maybe for about three years.

“The same thing happened this year over in Europe. The day before the tournament, he (Polmans) didn’t have a partner, literally the night before. He said ‘mate do you want to play?’ and I said ‘ok sure’ and we made the final of a Grade 1 so I guess it’s our good luck charm just last-minute doubles paring.

“Maybe we should just leave it as a second-choice paring and just come out of the blue every once in a while.

“He’s the doubles specialist, I’m happy to always play with him. I don’t think there is too many better doubles players out there than him, he’s got some pretty unreal hands at the net.

“Some other guys I’ve played with, you sort of get down and the team work just sort of stops, that doesn’t really happen with Marc.”