The Asia-Pacific Tennis League came to a grand conclusion during the Australian Open. 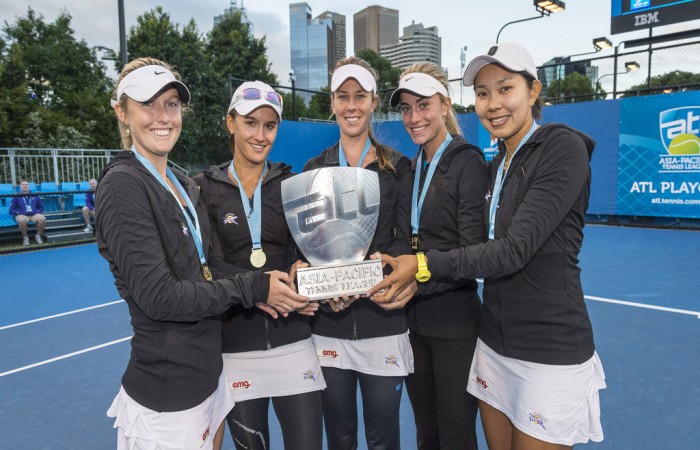 The Asia-Pacific Tennis League came to a grand conclusion during the Australian Open, with the playoffs of the State conference champions and International teams occurring.

Despite coming into the playoffs as the overwhelming favourites boasting a lineup that included highly touted players such as Olivia Rogowska, Daria Gavrilova, Arina Rodionova and Storm Sanders, the performance of the team was not hindered.

This was shown as they defeated the Pacific Oceania Dolphins in the first round, then backed this up with a victory over conference rivals the MCC Stars in the semi final.

In a tight final, the Thunder were victorious and secured the title 4 rubbers to 2 over the Flagstaff Freighters. Thunder number 1, Olivia Rogowska got her side off to a strong start, defeating the Freighters wildcard, Katarzyna Piter in straight sets.

This win was backed up by teammates Arina Rodionova and Varatchaya Wongteanchai, who both recorded victories against Jess Moore and Nicole Collie respectively.

Despite all the momentum being with the Thunder, Flagstaff’s Viktorjia Rajicic was able to secure a straight sets victory over Storm Sanders, keeping Flagstaff’s hopes of another title alive, following on from their 2013 ATL victory.

Going into the doubles the Thunder were in a strong position with a 3 rubbers to 1 advantage, however the Freighters combination of Moore and Piter were too strong for Rogowska and Rodionova, securing victory in straight sets.

This left the result of the match hanging on the outcome of the final doubles match, with the Thunder pairing of Sanders and Wongteanchai recovering from a set down to claim the rubber and title for the Thunder.