Marc Polmans and Akira Santillan won through to the quarterfinals of the boys' singles at the Australian Open on Wednesday. 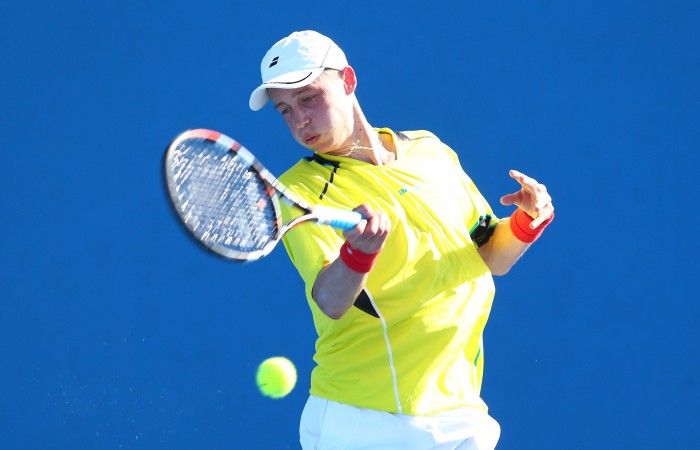 A combination of newfound aggression and junior experience allowed Marc Polmans to rocket into the quarterfinals of the boys’ singles at the Australian Open on Wednesday.

He will join fellow Aussie Akira Santillan in the final eight.

The 17-year-old Polmans, made light work of his third round opponent, Sumit Nagal from India, winning 6-1 6-1 in 45 minutes.

“It is good to go one step further than last year.

“I felt like the ball was coming pretty well off my racquet.

“I felt like I was pretty comfortable with my serve and my forehand. My ball-striking was, I think, the best so far in the tournament.

“We will see if we can sustain that level for tomorrow.”

The Victorian local said, although he dominated on the scoreboard, the first set was a bit of a grind.

“I think the first set was a lot closer than 6-1, there was a lot of juice-games that I won.

“In the second set, as soon as I got that break, he went away a bit and started playing more flashy shots.

“In the end I got away from him and he became a bit erratic.”

Tomorrow’s assignment is as tough as they come for Polmans who will square off against the tournament’s No.1 seed, Roman Safiullin from Russia.

The pair have met once with Safiullin victorious on that occasion. Polmans is keen to square the ledger.

“I don’t think I was as aggressive last year, I definitely feel like I can push him a lot more this time.”

Earlier, Santillan came back from the brink to win and reach his first quarterfinal at a Grand Slam tournament.

He won the last three games of the match against an ailing Chien-hsun Lo to claim victory 7-5 2-6 6-4.

Despite the win, the 16th seed says there is plenty of scope for improvement.

“I just feel like I’m not getting that connection with my racquet.

“It would be nice to have that for the next couple of days, but I got through luckily.”

The news was not quite as good for Jake Delaney, the only other remaining Australian in the boys’ draw. He found the No.1 seed Roman Safiullin from Russia a little too hot, going down in straight sets 6-3 6-3.

It was also a tough day for the Australians in the girls’ singles with the three remaining aspirants all eliminated.

After narrowly missing out in the opening set, Tomic was on song in the second and looked a chance of completing the comeback. However, Mihalikova managed to steady the ship in the third and win a match that was a lot closer than the scoreboard suggests.

Destanee Aiava met a tough opponent when she came up against the tournaments 4th seed Aliona Bolsova Zadoinov from Spain.

Bolsova Zadoinov took just 42 minutes to seal the deal over Aiava in a precision display of junior tennis.

It was another successful tournament for Aiava who has now reached the third round twice at just 14-years-old.

Kimberly Birrell, who was seeded 6th for the girls’ singles, suffered a surprise defeat at the hands of Canadian Charlotte Robilliard-Millette.

After taking the opening set in under half-an-hour, Robilliard-Millette served for the match at 5-2 in the second.

For a moment, it appeared as though Birrell would launch one of her trademark comebacks, but it was not to be as the Canadian took the second in a gritty 48-minute second set and completed a 6-3 6-4 upset.