Delaney and Polmans into boys’ third round at Open

Jake Delaney and Marc Polmans both booked a place in the third round of the boys' singles at the 2015 Australian Open on Monday with emphatic wins. 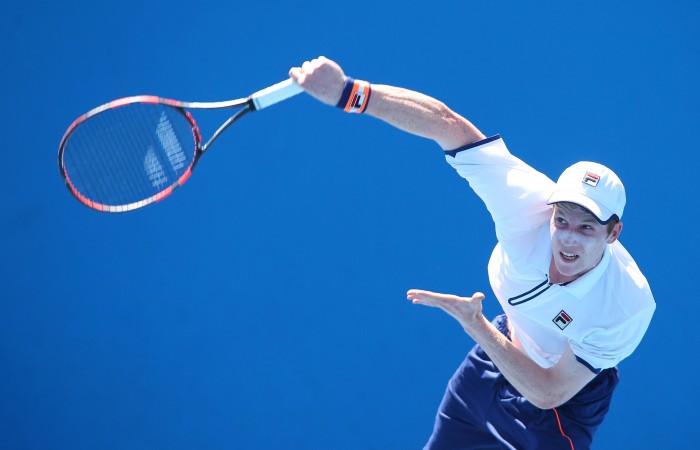 Jake Delaney has announced his arrival at the 2015 Australian Open in no uncertain terms.

The 17-year-old catapulted into the boys’ singles third round on Monday with a 6-0 6-2 demolition job on the tournament’s 15th seed Chan-yeong Oh of Korea which lasted just 51 minutes.

“I haven’t won a Grand Slam match until this tournament so two in a row is a pretty good start.”

Despite an 18-minute blitz in the opening set, Delaney explained that it was more his mind than his body that helped him dominate in such an imperious fashion.

“I’m pretty happy, I was a bit sluggish this morning because me and Marc (Polmans) had a tough doubles match last night.

“But I think mentally this morning I was pretty good. I stayed focussed for most of the points, I didn’t want to slip too much, so I ‘m really happy with that.”

The advantage for Delaney may have been the fact that he had beaten Oh in Korea back in October of last year and had a fair idea of what to expect from his 16-year-old opponent.

“I’d played him probably three months ago, I played really good tennis and it was tough but I did have some confidence knowing that I probably had more weapons than him.

“He’s a tough player, I played him last time and he made a lot of balls and I think that he maybe didn’t play at his best level and I managed to take advantage of that and play some solid stuff to keep him out of it.”

Delaney says it is now down to a matter of consistency if he is to keep producing similar performances to his efforts thus far at the Australian Open.

“It comes down to routines and just trying to do the same thing over and over.”

Marc Polmans joined his doubles partner Delaney in the third round with a 40-minute trouncing of Canadian qualifier Denis Shapovalov.

Like Delaney, Polmans dropped just two games in the entire match en route to a 6-1 6-1 victory.

The news was not quite as good for Australia on the female side of the draw.

Girls’ 7th seed Naiktha Bains ran into some quality opposition when she succumbed to the powerful Slovakian Viktoria Kuzmova 6-0 3-6 6-1.

Kuzmova started the match with all guns blazing in a 22 minute first set. Bains fought back in the second before Kuzmova was again dominant in the decider.

Olivia Tjandramulia could not quite replicate her thrilling first-round victory when she took on Chihiro Muramatsu from Japan. Muramatso prevailed in two grinding sets 6-4 6-4.

Wildcard Violet Apisah also bowed out of the girls’ tournament in the second round. She lost to Russian qualifier Anastasia Gasanova in two tight sets 7-5 7-5.

Four Australian juniors will be in action on Tuesday at Melbourne Park with Akira Santillan, Kimberly Birrell, Destanee Aiava and Sara Tomic still to play their second-round matches.