Santillan wins through as nine Aussies make second round.

Nine Australians are through to the second round of the junior tournaments at the 2015 Australian Open. 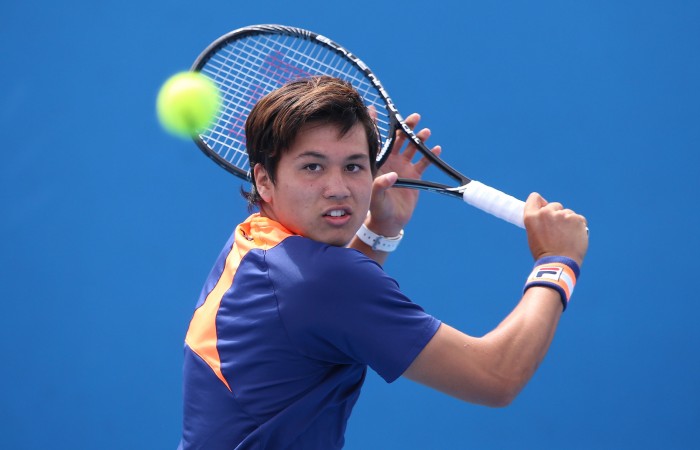 Australia’s only seeded player in the boys’ singles at the 2015 Australian Open won through to the second round on Sunday, but it was not all plain sailing.

On paper it looks like somewhat of a routine victory for a 16th seed, but it was far from beer and skittles for the Queenslander with the first set appearing a real struggle prior to having treatment for an injury.

“I was up 5-1 and serving and when I landed, I don’t know what I did to my groin but I injured it,” Santillan said on Sunday.

“Throughout the first set I couldn’t really serve 100%, I got broken twice and he kept on holding.”

“I took an injury time out at 5-4 and I think that helped me because my opponent, after that injury time out, was very scratchy and hit a couple of double faults.”

After taking the opening set, Santillan again found himself in a predicament before the situation turned.

“I just dug in and held serve at 3-2 and got another injury time out and sort of the same thing happened. I broke, held comfortably and then broke him again.

“I don’t think he really liked it, but I wasn’t doing it for the tactics or the gamesmanship, it was because of my groin.”

The injury does not appear to be a major concern for the current world junior No.23 who says he will be ready to roll again on Monday.

“I went to the physio and they just said it is sort of a spasm, they released it.

“I played doubles, I could still feel it but it was definitely better than the singles, I should be ready for the next round.”

It may be one of the few times that Santillan is spotted on the junior circuit in 2015 with his plans likely to see him playing elsewhere.

“Junior-wise I think I’m only playing the Slams. I think I’m going to start focussing on the pro tour. Hopefully I can do well and be ranked a little bit higher than where I am now.”

Santillan will now take on Nam Hoang Ly from Vietnam.

He will join two compatriots, Marc Polmans and Jake Delaney, who also booked a place in the second round a day earlier at Melbourne Park.

Nine Aussie juniors in total remained alive after the opening two days of play at Melbourne Park which will continue on Monday.