Bernard Tomic and Nick Kyrgios will be seeking to break a decade-long drought on Sunday, when they face fourth-round tests at the Australian Open. 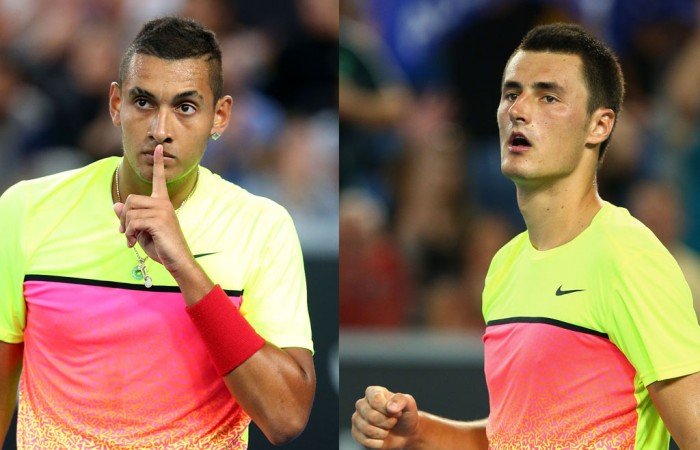 Bernard Tomic and Nick Kyrgios will be seeking to break a decade-long drought on Sunday, when they face fourth-round tests at the Australian Open.

Not since Lleyton Hewitt’s run to the 2005 final has a local hope progressed to the men’s singles quarter-finals at Melbourne Park.

Davis Cup teammates Tomic and Kyrgios, who reached the last eight of Wimbledon in 2011 and 2014 respectively, have a chance to do just that.

Tomic next faces Czech Tomas Berdych, while 19-year-old Kyrgios is up against Italian Andreas Seppi.

Tomic’s challenge looms as the toughest; Berdych is seeded seventh and has made a semi-final appearances at all four majors.

Tomic has first-hand experience of Berdych’s weapons, having been downed in two tight four-set shootouts at Wimbledon.

“You have to serve well. He hits the ball so hard,” Tomic said.

“I’ll prepare as much as I can. There’s opportunity for me.

Although it was an exhibition event, Tomic is also drawing confidence from a defeat of Berdych at neighbouring Kooyong.

Tomic is the third match of the day on Margaret Court Arena, while Kyrgios won’t start his Hisense Arena clash before 6.15pm AEDT.

Kyrgios had been priming himself for a blockbuster fourth-round showdown with Roger Federer.

But that all changed when world No.46 Seppi provided the shock of the tournament, ousting the second seed on Friday.

Even Seppi had given himself little hope of an upset.

The Italian was forced to delay his departure and rebook flights after the boilover.

“It’s hard not to think about playing possibly the greatest of all time,” Kyrgios said.

“Obviously I’d rather play Seppi than Federer, of course.

“But I know it’s going to be a really tough match.”

Underlining his enormous potential, Kyrgios is striving to become the first teenager since Andrei Cherkasov in 1990 to make the last eight at Melbourne Park.

Kyrgios defeated Seppi in straight sets at last year’s US Open.
“He knows what to expect. I know what’s coming, as well. I think it’s going to be a fun match,” he said.