Polmans and Delaney through to boys’ second round

Marc Polmans and Jake Delaney are through to the second round of the boys’ singles tournament at the Australian Open after winning their respective matches on Saturday at Melbourne Park. 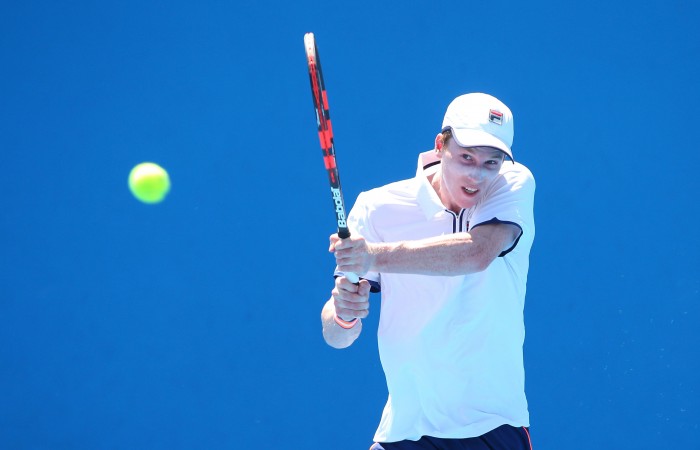 Marc Polmans and Jake Delaney are through to the second round of the boys’ singles tournament at the Australian Open after winning their respective matches on Saturday at Melbourne Park.

For the second year running, Polmans ousted a seeded player in the first round when he eliminated 10th seed Corentin Denolly from France 6-2 7-6(4).

Polmans says a combination of home-court advantage and increased aggression under coach Wayne Arthurs were ingredients to his victory.

“I was happy with how I played today and hopefully I’ll get better as the tournament progresses,” the 17-year-old said.

“It is a pretty good feeling coming out and playing in front of my friends and family and all the Aussie supporters, it pumps you up in a tiebreak situation. It gives you that little edge to keep pushing and chase that one extra ball down.

“In the second set, I was being a little bit cautious with my ball striking but once I picked it up, I felt I was more able to dictate the rallies. He was being pushed further behind the baseline and I was being more aggressive.”

The accomplishment of defeating one of the tournaments seeded players has an extra upside too Polmans explained.

“You can take their draw knowing that they are a top seed so it’s good.”

With aggression being a work in progress for Polmans and Arthurs, he feels that the new style of play will allow his game to mature.

“I know last year was a little bit disappointing at the Slams, not playing the tennis that I wanted to. This year, the mistakes I made last year, I will not make again.”

Delaney had to call on his fighting instincts to come from a set down against Swiss youngster Johan Nikles and win 3-6 6-3 6-4.

He says it was a case of first-round jitters that contributed to his slow start.

“I sort of struggled a little bit at the start finding just my rhythm on the court, but after that first set I played pretty well and I’m pretty happy with the result.

“In the first round, there’s a little bit of nerves there of course, but it sort of worked its way out after the first set which is good.”

The match featured a final set that was not without its share of trying moments for Delaney who, after leading 4-0, was required to exhibit his share of nerve under pressure.

“I had a lot of tough games in that last set, sort of scraping through with some advantage games. In the last game I just really tried to focus on my first serve and it worked pretty well.”

A combination of good preparation and planning is the recipe that Delaney hopes will lead to an improved 2015. Something that will allow him to achieve his goals.

“I’m doing everything on my own terms now, I’m focussed on what I really need to do, I’m in a lot better shape and training the way I need to.

“I’d like to get a bit higher in those junior rankings and start to improve my pro ranking a bit but doing well in the Grand Slams is my main goal.”

The results of his toil could start to show at Melbourne Park over the coming week.

The boys’ singles first round continues on Sunday.