Ajla Tomljanovic stormed into the second round of the Australian Open with a three-set win over American Shelby Rogers on Tuesday night. 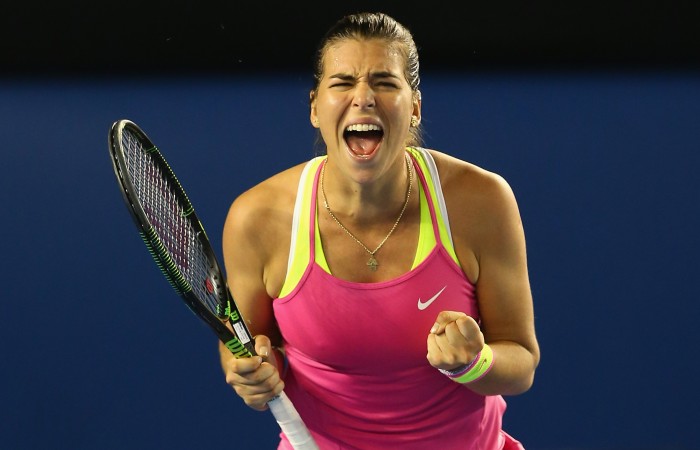 Ajla Tomljanovic felt she benefited from being on the wrong end of a bad call, as the 11th local hope stormed into the second round of the Australian Open.

The second day of the tournament ended with a spirited Tomljanovic fightback on Rod Laver Arena, the Croatian-born Brisbane resident downing Shelby Rogers 4-6 6-4 6-0.

Tomljanovic broke Rogers’ serve six times in the two-hour tussle, the most crucial coming when the second set was well balanced at 3-3.

Chair umpire Julie Kjendli asked for a point to be replayed during the set, much to Tomljanovic’s disbelief.

“She’s already played the ball,” Tomljanovic pleaded on the court.

Tomljanovic’s appeals were dismissed, but her fire was far from extinguished.

The 21-year-old steamrolled Rogers in emphatic fashion, dropping one game from that point on.

“I really thought I was right about that point and it did get me going a little bit,” she told AAP.

“Maybe it was good I got a call against me. It definitely helped in the second set.”

Many have dropped their bundle in similar situations, but Tomljanovic suggested that wasn’t an option.

“If I lost my cool then it probably would have been game over,” she said.

Tomljanovic is expected to gain Australian citizenship in coming months, having played the 2011 and 2014 Australian Opens as a Croatian.

She defeated former world No.1 Jelena Jankovic earlier this year in her new hometown of Brisbane, then felt even more love in her first home grand slam.

“I never experienced that in my life. I’ve never had that,” she said.

“When you’re down and losing, and not feeling good about yourself – to see someone push you and still believe you is unbelievable.