Kokkinakis ‘not finished yet’ at Aust Open

Australian teenager Thanasi Kokkinakis is savouring the biggest win of his career, a shock first-round defeat of world No.13 Ernests Gulbis that has sent local hopes soaring. 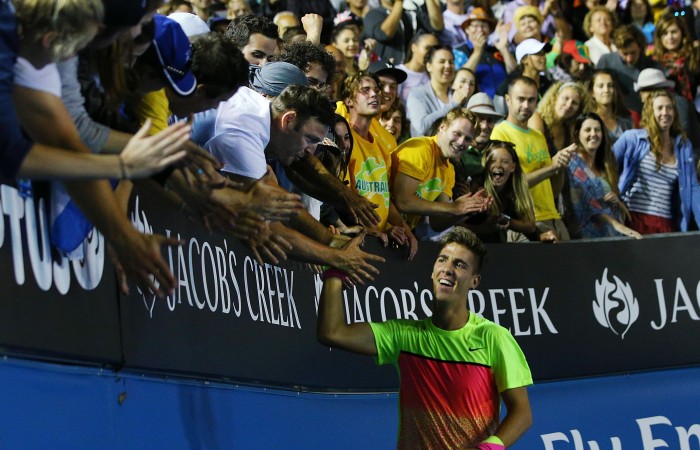 Thanasi Kokkinakis is refusing to place a limit on how far he can venture in the Australian Open draw after setting Melbourne Park alight.

With Kokkinakis to meet Sam Groth in an all-Australian second-round clash on Wednesday, only German Philipp Kohlschreiber can deny the hosts a player in the second week of the men’s singles draw.

The winner of the Kokkinakis-Groth match will take on either countryman Bernard Tomic – or Kohlschreiber – for a spot in the last 16 at Melbourne Park.

Tomic beat Kohlschreiber in straight sets last week in Sydney and said he was quietly confident of a repeat win as he continued his resurgence from double hip surgery.

Tennis great John Newcombe predicted Kokkinakis would make a big move this year and the 18-year-old didn’t disappoint in Melbourne, his 5-7 6-0 1-6 7-6 (7-2) 8-6 victory over Gulbis opening up the draw for the Australians.

And Kokkinakis said he wasn’t finished yet.

“I’m not putting a limit on myself. I’m just taking it match by match,” he said.

“I beat a guy that made the semis of the French. He probably wasn’t in his best form, but you can only control what you can control.

“It was exciting. I know it was a good win. There’s more to come.”

Groth plundered 24 aces in dismissing Serb Filip Krajinovic in straight sets for his first win at the Open and Kokkinakis knows his Davis Cup teammate will be a tough nut to crack.

“Like (Gulbis), another big server, I’m going to see a few go past me.

“But I’m going to try to make it difficult for him, put it in spots where he doesn’t like it and hopefully, when the big moment comes, I’m ready to take the opportunity and step up.”

Kokkinakis, the world No.147 with a bullet, and Groth are almost certain to meet in the feature night match at Rod Laver Arena on Wednesday.

“Obviously it makes it difficult for the crowd, you know, where their allegiances lie and that sort of thing.”

There’ll certainly be no divided loyalties for Tomic’s match after the one-time polarising figure won back the fans with his tough four-set first-round win over Tobias Kamke.

The win came a year after he was booed for quitting against Rafael Nadal at Rod Laver Arena.

Now Tomic has the chance to guarantee an Australian in the last 16 with victory over Kohlschreiber, the tournament’s 22nd seed.

“I’m confident, but it’s a player that is very, very, very capable of beating everyone,” Tomic said.

“People think I beat him last week, I should be the favourite for this. It’s not that easy.

“He’s a very quality player. I have to prepare as much as I can.”