Unfazed by her summer struggles, Samantha Stosur says it's an honour to lead the local charge at the Australian Open for a sixth straight year. 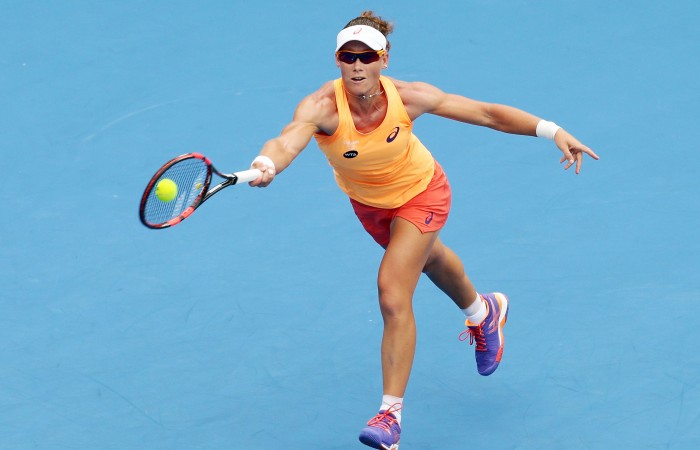 Unfazed by her summer struggles, Samantha Stosur says it’s an honour to lead the local charge at the Australian Open for a sixth straight year.

Stosur was on Wednesday seeded 20th for the season’s first grand slam starting on Monday and chuffed to learn that she has now carried the tag as Australia’s top-ranked tennis player – man or woman – for an unbroken stint of five-and-a-half years.

Not even Lleyton Hewitt, who held the men’s world No.1 ranking for a total of 80 weeks at the start of the millenium, ever enjoyed as long a reign without being knocked from his perch as the country’s top player.

“Tennis in Australia has got a huge history. What people did 30, 40 years ago is such a high benchmark and I’m very proud of that achievement,” Stosur told AAP.

“I’d like to stay there as long as I can and know there’s a lot of people knocking on the door.

“Casey (Dellacqua) had a fantastic year last year and isn’t too far behind me.

“It’s a great a spot to be in. I’m obviously very proud of it but trying to make it better and better.”

Stosur has held Australia’s top ranking ever since reaching the French Open semi-finals in June, 2009.

With Mark Philippoussis occupying top spot for the best part of a year following his charge to the 2003 Wimbledon final, Hewitt’s longest unbroken run as Australian No.1 before Stosur’s emergence was less than five years.

Despite her status, Stosur accepts the flak she seemingly receives annually for not making the business end of the Australian Open comes with the territory.

“There’s always criticism there. It’s part and parcel of being a sportsperson,” she said.

“You look at Roger (Federer), people have written him off, saying he’s not going to win another slam – but he’s No.2 in the world again.

“It just shows level of expectaction people have and no one has more expectations on themselves than me.”

Dellacqua is Australia’s only other Open seed this year – at No.29 in the women’s event.

Two-time champion Victoria Azarenka has missed out on a seeding after enduring an injury-interrupted 2014 campaign.

The 25-year-old Belarusian ended 2014 ranked No.32 in the world, but a first-round loss at the Brisbane International dropped her to 41st at the end of last week, outside the cut-off for seedings at Melbourne Park.

Five-time Open champion Serena Williams will be the women’s top seed as she chases a first title at Melbourne Park since 2010, while Russian Maria Sharapova is the second seed.