The Woolworths Australian ballkid program was officially launched at Melbourne Park today, as the 380+ Australian Open 2015 squad gathered for the traditional team photograph. 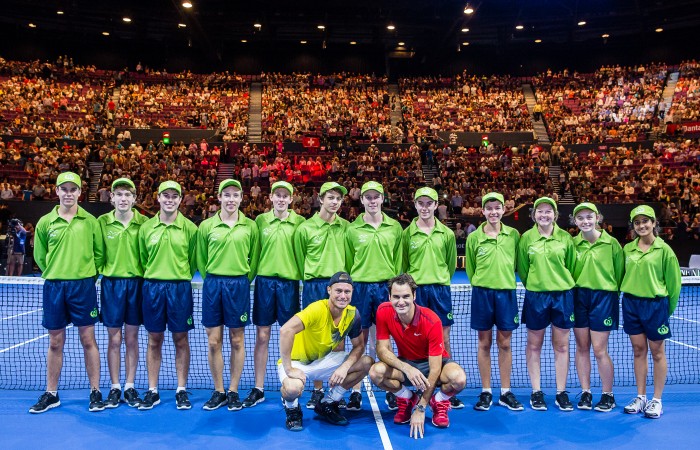 The Woolworths Australian ballkid program was officially launched at Melbourne Park today, as the 380+ Australian Open 2015 squad gathered for the traditional team photograph.

In a new partnership, Tennis Australia and Woolworths will work together, aiming to give as many Australian kids as possible a ballkids experience, enhance the profile of the ballkid program nationally and increase ballkid registrations for events throughout Australia including the Australian Open, Australian Open Series and Pro Tour.

“We are delighted to partner with Woolworths, one of Australia’s biggest and most respected brands, to continue to grow and promote our tremendous ballkid program,” Tennis Australia CEO Craig Tiley said today.

“Tennis Australia is recognised as a world leader in the way we train and manage our ballkids. The Australian Open is an international showcase of the commitment shown by this terrific group of kids and their dedicated supervisors and training team, and we get lots of comments from the players on how fantastic they are.

“Our ballkids are also great examples of how to lead a healthy lifestyle and we look forward to working with Woolworths, with their focus on fresh food, to grow the program for years to come,” Tiley continued.

“We’re delighted to be involved with some fantastic Aussie kids at one of the world’s great sporting events.

“The Australian Open ballkids showcase some talented young Australians who’ve worked very hard to get on the team which is recognised as the best in the world.

“We’re extremely proud to be able to work with Tennis Australia on the ballkids program, which at promotes a healthy lifestyle, leadership skills and builds confidence, but most of all is great fun,” he said.

To register to become part of the Woolworths Australian ballkids program, visit: www.tennis.com.au/ballkids