Aussie big guns Bernard Tomic, Nick Kyrgios and Sam Groth are all in action today at the Apia International in Sydney. 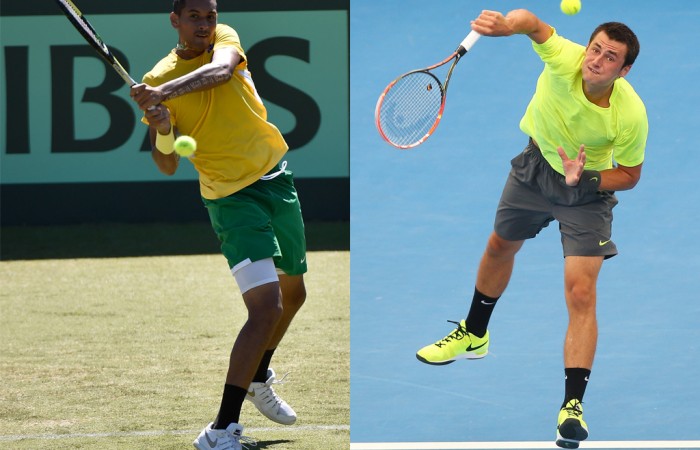 Bernard Tomic will look to continue his outstanding recent form at the Sydney International when he gets his campaign underway with a first round match on Tuesday.

The Australian has much to lose in his match against Dutchman Igor Sijsling given he’s defending ranking points from finishing runner-up at the tournament last year.

It followed a title win in 2012, suggesting the Gold Coaster is very much at home at the Olympic Tennis Centre.

The vagaries of the tweaked ranking system means Tomic has already dropped 18 spots this week to world No.71 before he has played but if he again gets deep into the tournament that number will improve significantly.

He will be warm favourite against Sijsling, ranked No.83 in the world.

A tougher task awaits for Tomic’s compatriot Nick Kyrgios, who faces world No.42 Jerzy Janowicz in his first round match on Tuesday night.

Janowicz is a Wimbledon semi-finalist and hits the tape at 203cm, offering a tricky proposition even for someone of Kyrgios’s not inconsiderable skill.

The Canberran is looking to shake off a back injury which kept him out the Hopman Cup – where the in-form Janowicz led Poland to the title.

Elsewhere in the men’s draw Australian Sam Groth looks to continue his strong season start when he play Gilles Muller while defending champion Juan Martin del Potro will hope to put a horror injury year behind him with a win over Sergiy Stakhovsky.

In the women’s draw Samantha Stosur should be in a buoyant frame of mind when she tackles Barbora Zahlavova Strycova, the Australian burying a few demons with her tough three set win over Lucie Safarova.

With a 2-9 record against Safarova before her win in Sydney and a first round exit in Brisbane, Stosur was again feeling the heat of the Australian public before the opening slam of the year.

But after the victory the 2011 US Open champion said she was in good shape.

“I guess I am probably a bit more relaxed about it this time around,” Stosur said of her lead-in to Melbourne Park.

“I think it’s just going through all these experiences and trying really to just embrace it. I’m really trying to make it about what I’m trying to do on the court and play the way I want to play – win or lose.”

Top seed Simona Halep from Romania gets her campaign underway after a first round bye against Karolina Pliskova while Australian Jarmila Gajdosova backs up from a win on Monday to play Dominika Cibulkova.