Ken Rosewall has warned new Australian No.1 Nick Kyrgios he'll be a wanted man from now on. 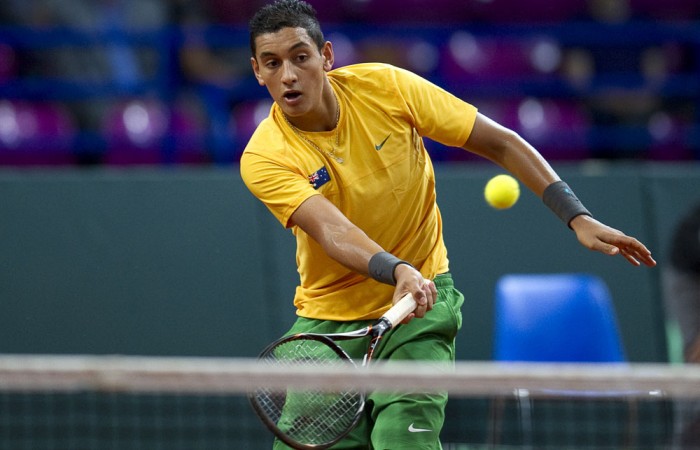 Tennis legend Ken Rosewall has warned new Australian No.1 Nick Kyrgios he’ll be a wanted man from now on.

The Wimbledon quarterfinalist will launch his summer campaign at the Sydney International as the country’s top-rated men’s player after leapfrogging Lleyton Hewitt in the world rankings this week.

But the teenage ace faces a tough time opening his 2015 season with a maiden tour title in Sydney – a feat countryman Bernard Tomic achieved two years ago – after copping a treacherous draw on Saturday.

After withdrawing from the Hopman Cup with a back complaint, Kyrgios returns for his first ATP event in three months against big-hitting 2013 Wimbledon semi-finalist Jerzy Janowicz.

If he gets past the power-serving bean Pole, Kyrgios will likely meet Argentine fifth seed Leonardo Mayer in the second round and could strike defending champion Juan Martin del Potro or top seed Fabio Fognini in the semi-finals.

Rosewall is backing Kyrgios to deliver, but has advised the 19-year-old he’s no longer the hunter but the hunted following his giantkilling defeat of Rafael Nadal last year at the All England Club.

“I think he’ll find out, because of his rapid improvement and performance at Wimbledon and other singles events, that a lot of players will be planning to be in top form when they play against him,” Rosewall said on Saturday.

“Hopefully Nick can remain physically free of any problems, and he’ll be in good form.

“I think there will be extra pressure on him to stand up to being the No.1 player in Australia.”

The eight-times grand slam champion – after whom the centre court at Sydney Olympic Park is named – said there was no reason Kyrgios or Tomic, who begins against a qualifier, can’t win the Australian Open lead-up event.

“There are so many top players that anyone on their day can beat anybody and win the event,” Rosewall said.

“For Nick, one so young, you’d like to think the future of Australian tennis is going to improve and certainly encourage other young players to improve and work hard.

“That’s going to be necessary to bring Australian tennis back to the top.

In a boost to local hopes, officials on Saturday handed their last two men’s wildcards to in-form Sam Groth and Marinko Matosevic.

Groth will play veteran Gilles Muller in the first round, while Matosevic is up against Italian Simone Bolelli.