Aussies Andrew Harris and Alex Bolt have both reached the semifinals of the City of Onkaparinga Challenger 2015 at Happy Valley. 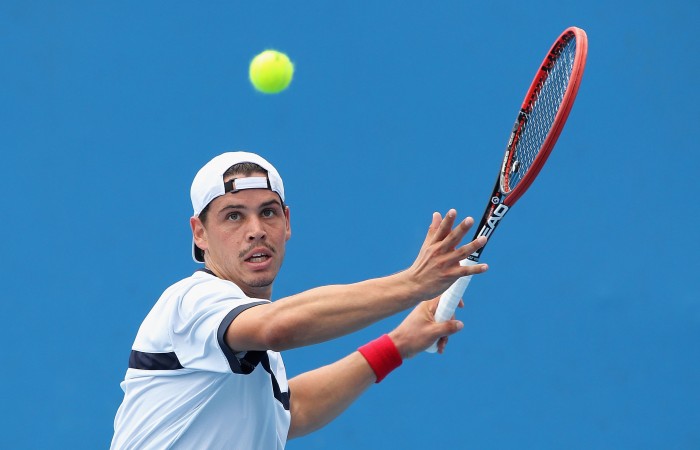 Aussies Andrew Harris and Alex Bolt have both reached the semifinals of the City of Onkaparinga Challenger 2015 after they each upset seeded players in cold and windy conditions on Friday.

Both players were clearly exuberant after their wins with each suggesting they are playing some of the best tennis of their lives this week in Happy Valley.

“Hopefully I can keep this form up heading into the semi tomorrow,” said Bolt, who celebrated his 22nd birthday on Monday.

“My game is just all starting to come together,” he added. “The off-season was probably the hardest I’ve ever trained and on the mental side of things I think I’ve really sharpened up as well.”

In the other semifinal, 20-year-old Harris will meet second seed Marcos Baghdatis, who battled from a set down to overcome fifth seed Aleksandr Nedovyesov on Friday.

“I remember watching [Baghdatis] live in the Australian Open (in 2006) and now I’m playing him. It’s an exciting opportunity,” Harris said.

“He will definitely be the highest profile player I’ve ever played.”

However, the young Victorian is by no means overawed by the occasion.

“It’s a great feeling (to be playing so well),” he said. “And I still feel like I’m getting better.

“I’m gaining in confidence each match, so if I can play even better tomorrow…it will be interesting to see how I go.”